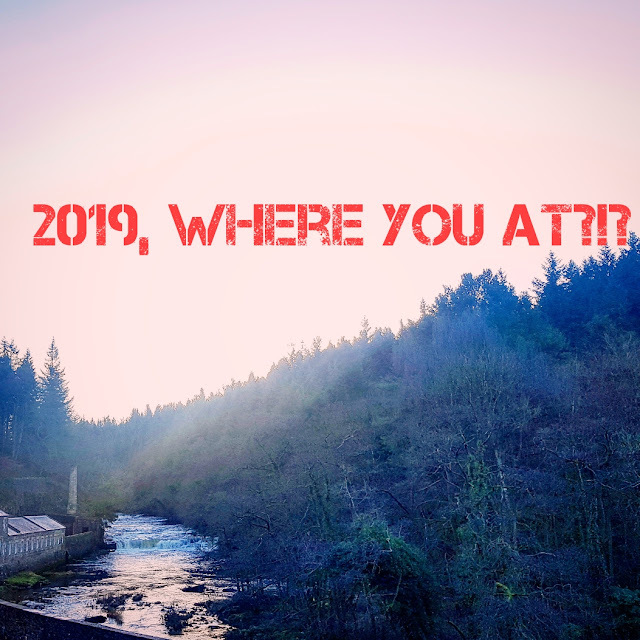 How the hell did that happen? I swear to god it literally seems like only about a week ago that I posted on Instagram at the end of 2017 . . . and now 2018 is screaming to an end! Why does time go so bloody fast???

Yet another year where I've not managed to lose any weight. Well, that's technically not true - once again I've lost and regained the same half stone over and over again. Where I've failed to save any money. Where I've failed to get my flat or myself in order, telling myself I'll do stuff and putting it off, where I've ate too much junk, imbibed too much wine. Where I've  spent a ridiculous amount of time on Instagram but only posted something like ten blog posts all year . . . in terms of general life and health it has probably not been a success.

I can hopefully turn this around in 2019. In October next year I'm going to be turning the big 4-0 (jeez) and I'm determined to do this in better shape than I've been in years. I started back at the gym at the end of this year (okay, I've only been three times so far, but still, it's a start) and I want to get out walking more - we're talking about possibly doing the Kilt Walk this year too, which would involve a lot of walking training if we do commit to that.

But anyway . . . there was still loads of good stuff to happen in 2018. I had lots of amazing times travelling with the amazing fella - a few trips up around the Highlands in the first couple of months of the year, followed by two amazing weeks in Kefalonia in May, seven days in Crete in August, and a return to Ibiza for my 39th in October, as well as a well deserved long weekend on a farm in Shropshire complete with hot tub over the summer. Bliss. At the moment we have no holidays booked for next year, but I do have a hen weekend in Prague in 2019, and we have a couple of hotel stay voucher deals to book up, including one on the Isle of Skye!

While I have not had much motivation to blog, I have read loads of books, eaten loads of great food, cooked tons, and managed to grow my instagram following to over 1200, which took me AGES, but it's good to finally get there, I've also managed to post a few pictures that got more than 100 likes, which is such a big deal for me. I know there are people out there with 10s of thousands of followers who are far more successful than I am, and I would love to be there one day but at the moment this is an achievement for me. I've worked so hard on my Instagram this year and I'm proud of what I achieved. I would still always love more engagement though so, if you don't already, do a girl a solid and pop by my grid once in a while . . . hopefully you'll like what you see and keep coming back for more. ;-)

Next year I am going to have to finally take control of my money, start a budget and get some savings (any tips on saving money and making extra money, please please let me know!), lose that few stone that's been plaguing me for several years now, hopefully get away on a couple of lovely holidays,and just generally make the last year of my thirties a great one. I am also going to make a continued effort to be kind because I feel like there's way too much unnecessary unkindness going around these days, and it drives me nuts. No one needs to be nasty. No one.