So after a couple of years of avoiding it, I decided to give Love Island a chance this year. I was getting a bit sick of everyone talking about it apart from me last year, and having no idea who any of the people were that they were constantly gossiping about so I figured "if you can't beat them, then join them". 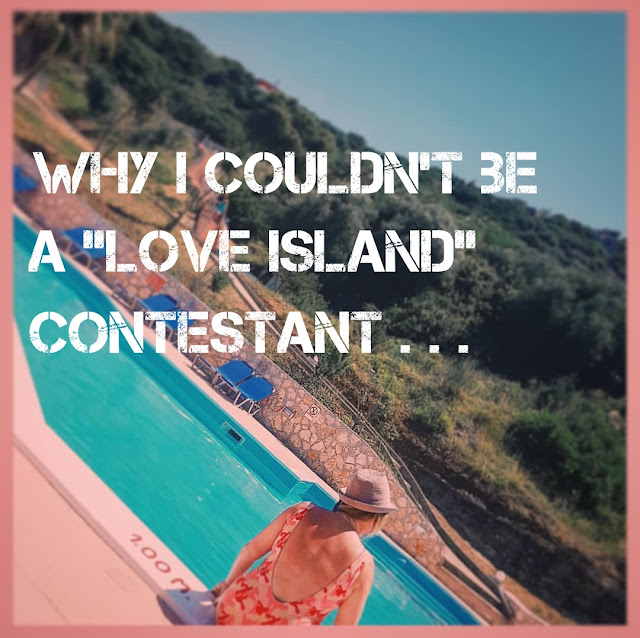 And I have to admit, I've found myself a wee bit hooked. I'm so invested in the villa dwellers now that I practically feel like I'm living with them.

I also spend more time than is really necessary looking at Love Island related memes on Facebook and Instagram (surely Love Island is the pinnacle of the existence of memes), especially ones relating to Georgia and the word "loyal".

And if all of this means absolutely nothing to you, then that's exactly the person I was last year, and the previous seasons. And I'd like to say that back then was a better time, but do you know what? I've enjoyed watching it A LOT, I'm not really sure what I'm going to do with my time once it ends, and I love hearing people talk about it. I have had to stop myself butting into so many conversations about the antics going on within the villa. And I've been told this is the most boring one yet!!!

Anyhoo, do you ever think that YOU could go on Love Island? I definitely don't think I could. And here's why . . .


***I'm pretty sure I'm way too old, for a start. Considering 29 year old Laura has had absolutely shitloads of jokes made about her age (and I'm pretty sure they only put another Laura in there so they could legit refer to the old Laura as "Old Laura"!), and I'm 9 years older, I think I would be ripped to shreds for my age in there. On the upside, possibly I could get a  lucrative wee deal (no pun intended) for adult nappies or something like that after I leave the villa . . .

***I would really not be good at the whole "dating on camera" thing.  You might be new to my little corner of the internet so you might not know I have no internal filter and, back in the day, I've said such delightful things on dates like "did you enjoy your pee?" when I don't know how to fill the tiniest of silences. You think Doctor Alex is awkward? You ain't ever went on a date with me. And you probably wouldn't go on a second, like the guy who pretended he had swine flu and then got back with his ex just to avoid another date. And no, I'm not kidding about that . . .

***I couldn't deal with the trolling This is a pretty serious one, given recent events. Yes, there's been a lot of shitty behaviour going on within the house, but we need to remember it is a bit of a pantomime, it's meant to be entertainment, and there's some heavy editing shit going down. There''s been some downright nasty things said about people in the house, slagging off physical appearances, calling people horrible names . .  . I don't think I could cope with that . . .especially on top of the old jokes I'd be getting already.

***Looking so perfect all the time would be bloody difficult. I mean, how gorgeous are all of those girls?? How ripped are all those guys? I know there's been talk about how some of them have had work done, to varying degrees, but they all were gorgeous in the first place and the idea of walking into that villa in a bikini to face them actually makes me feel a bit like I'm going to be a bit sick in my mouth. I mean, do you think they'd let me have a body double for like, all of the scenes? While we're at it, actually, how about a face double too? Preferably with a face like a young Bridget Hall?

***I think I'd get bored. Is there a telly? Or books to read? I'm guessing the phone they're supplied with doesn't have wi-fi either or they could have quite easily found out that it was Georgia who initiated the kiss with new Jack and all of the drama wouldn't have kicked off about that. I need books and wi-fi at the very least, even in a gorgeous villa like that. I would be so bored so quickly without. Surely that's not just me?

***Getting dumped on screen wouldn't be fun. I mean, getting dumped in private isn't fun either, but look what poor Laura has been through. Binned for other girls twice AND THEN HAVING TO STILL SEE THE EXES KICKING AROUND WITH THE NEW BIRDS?? Absolutely horrendous. And having your reaction shown on the telly to this? And splashed all over the cover of the tabloids, and memes getting made about it? Absolute carnage. Not for me at all. I cry a lot at the best of times (refer back to me crying over Jani earlier), I would be flooding the villa with my tears if I was treated badly.

One more reason why I probably couldn't go on Love Island???


Do you think you could go on Love Island? I'd love to hear your thoughts!
Posted by P at 8:06 pm