AN OPEN LETTER TO MOSQUITOES . . . 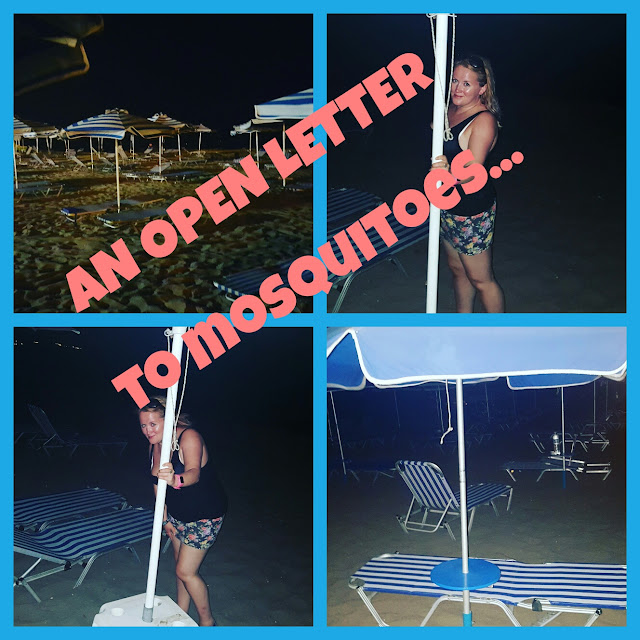 Dear mosquitoes of the world,

It's very flattering, don't get me wrong. I would never have imagined I had such delicious blood that you all come swarming to me like bees to honey or moths to a flame. However, I am absolutely sick to the back teeth of having pretty much every foreign holiday I go on result in me ending up covered in bites.

And while some people do not appear to be affected at all by mosquito bites, I firmly fall into the opposite camp.

Mine are itchy and unsightly, and I never know quite what they're going to do next. On my first day in Rhodes, I was bitten several times on the foot and legs before I even had time to smother myself in mosquito repellent. I don't know if it was just one of you little blighters who did all of that bite-work, or whether it was several of you . . . either way, not one of them reacted in the same way. Some reddened to different degrees, others blistered . . . there was one that I had to cover with a plaster almost immediately as it was so tremendously ugly.

It makes the whole holiday process more difficult because I'm trying to treat the bites, while stopping new ones, AND balance this with frequent reapplication of suncream so I don't end up with sunburn to add to the irritation of the mosquito bites. And if I DARE to go in the pool, you have to go through the whole rigmarole again once you're out because if you guys sense any sort of weakness, any little chink in the armour, you zoom right in there like the heat seeking little missiles you are and chomp away at me.

And it's not even necessarily places with ridiculously hot climates that you seem to frequent, lying in wait to pounce on my flesh. I once got attacked by one of you in Paris in April one year! Three times on the hand, and it was so bloody sore I ended up shouting at the fella when the poor dude tried innocently to hold my hand when we were at Euro Disney the following day. I hope you're happy with your behaviour!!!

The thing that winds me up the most about it is that there doesn't seem to be anything I can do about it. No matter how much repellent I apply, you still manage to get in there somehow and suck my blood. And they always end up scarring. And never seem to even attempt to heal until after I am home from the holiday.

I just wish there was a solution - a way you could just leave me the hell alone. Or a miraculous cure for making the bites vanish almost as soon as they appear.

Unfortunately, I haven't found a solution or a cure. But I live in hope.

In the meantime, if you could all just give me a break for my next couple of holidays, I would be extremely grateful.

Email ThisBlogThis!Share to TwitterShare to FacebookShare to Pinterest
Labels: holidays, the one where i rant and rave, travel