WHAT MAKES ME SWITCH OFF AN EXERCISE DVD . . .

I'm a wee bit of an exercise DVD addict.

I've had wee phases of getting into the gym (emphasis on the "wee phases" part - they normally last a couple of weeks max) and I tried to get into running a couple of times without success... and I'm not a "class person" either - my once a week pole fitness class can be stressful enough for me at times (I am ridiculously possessive over the pole I use and get very upset if anyone beats me to it!), so I wouldn't want to add to that stress. So exercise DVDs are my saviour.

Well, I'm not sure "saviour" is the right word. I am interested in exercise DVDs.

Using them is a bit more sporadic, let's just say.

I do however feel I'm a wee bit of an expert in them due to me owning so many of the damn things. So I thought it would be good to do a post about the things that I don't like in an exercise DVD. Y'all ready to hope on board today's rant? Okay, let's do this! 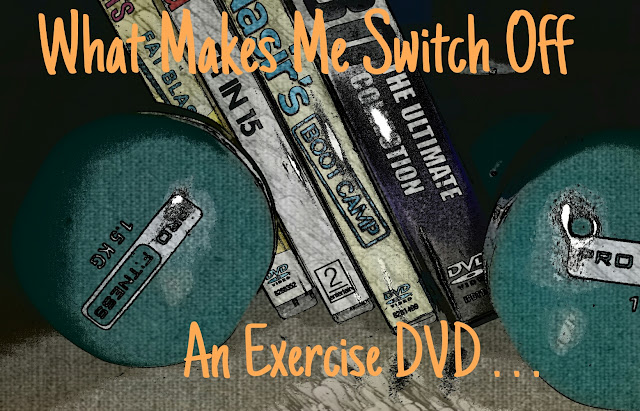 When the people in the DVD don't have their hair tied back
I don't trust people who work out with their hair loose. Either their workout isn't hard enough or they have some sort of ridiculous sweat glands that just don't produce sweat. And how dare they look glam after the same workout that makes me look like an angry tomato with a greasy scalp? They're taking fecking liberties, that's all I can say! Oh, and while we're on the subject of hair, what about the celebrities who appear to have gotten hair extensions purely for the purpose of the DVD so they can have a high swishy ponytail? We don't care about your fecking hair, we are trying to get your celebrity BODY here!

Jumping around
I hate exercise DVDs that involve too much jumping around. I don't mind the odd bit, I know this plyometric stuff is good for me but my legs hate me for it! Oh and lunges, especially jumping lunges are the worst. My knees are my worst enemy (well, after my flabby gut) and this sort of move really does not agree with me . . . and is most likely to leave me walking away from your DVD and never returning.

Strange dialogue
If you find a DVD that you don't mind the exercises for and start doing it regularly, one thing you notice the dialogue going on during it. And sometimes it's really bloody weird. One DVD I do fairly regularly, the Clare Nasir one (I know, I didn't know who she was either) has an exercise they do called "Stir the Soup" during which a very strange conversation goes on between Clare and her trainer "What's your favourite type of soup?" she asks the trainer. He replies "Strawberries and cream . . . but I don't think it's allowed on the diet plan." That is just weird, but I can accept it because the workout itself is okay. Other DVDs have had me screaming at the TV to shut up. Jillian Michaels spouting her self-help crap or telling me not to "phone it in" makes me want to hurl the remote, for example.

Repeating the same moves over and over and OVER again
There's a particular trainer who does this a lot and is behind a few so-called-celeb fitness DVDs. If you don't mind a certain move that's one thing . . . but if you end up having to do more than 300 knee lifts over the space of a 20 minute section of workout (and, yes, this has happened to me!), it seems a bit too much like overkill, even if it does burn a lot of calories. The boredom just ain't worth it!

Long warm-ups which are part of one of the main workouts
I generally like to do my own warm-ups when I am going to do a fitness DVD. This is because I find the ones on most DVDs a bit boring and frustrating. So I hate when a fitness DVD goes to the trouble to split the DVD into sections that you can skip between . . . but attach it at the start of the first workout so you have to try and fast forward through it if you want to do your own warm-up and then launch into that particular section. Very irritating. See also: cooldowns at the end of one section of the workout - this generally happens with ab/core workouts. Sometimes I might want to do the cooldown without the ab part first, you know!

Someone really buff doing the "easy" version of the moves
It's always nice when there's an easy version of some of the moves, especially when they are particularly hard. When it's someone who is quite clearly in extremely good shape and more than capable of doing the harder moves, it winds me up. I feel a bit patronised.

Including burpees in the workout
Main reason here is that burpees are the devil, they exhaust me, and I can't bloody do them properly! Is it just me who hates them? Am I the only person who finds their body won't actually work correctly when I try to do them? How the hell am I meant to make my legs jump out behind me and then propel me upright in one swift move? My body can't do it! Burpees make me feel like a failure. Please don't add them in! I can try and fail at them on my own time, 'kay?

Email ThisBlogThis!Share to TwitterShare to FacebookShare to Pinterest
Labels: diets, health, the one where i rant and rave