So I've been enjoying a couple of days off work this second half of the week, and this meant I could catch up with my sister (she works in retail so often has random week days off). We decided to go bowling, as neither of us had been in a while. We both love it - I'm shit at it but want to be good (plus the fact that I can enjoy a vino or three while playing is obviously an added bonus) and she is great at it and who doesn't love a game that you're great at?!?

However, there are a couple of things that do irritate me about bowling - would you expect anything less from me??? - so I decided it would be an ideal time to write a blog post about this while it's still fresh in my head! So let's get on with it, shall we? 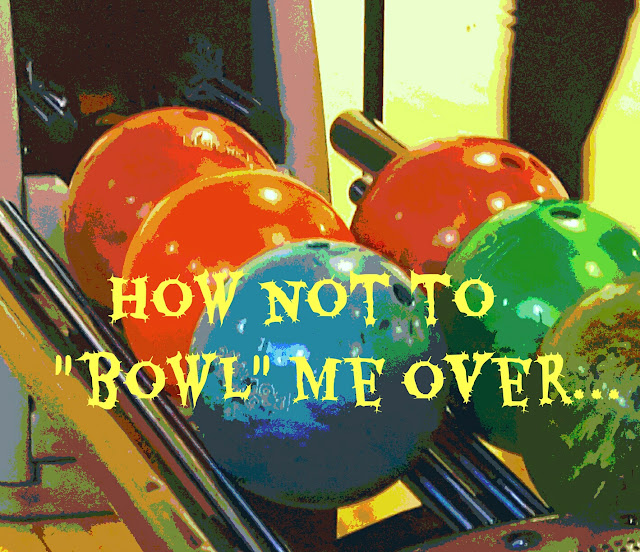 Getting set up . . . for instant failure!
You want to be all independent when the staff ask whether you need help setting up your names etc at your lane, and say you can do it yourself. Then you look at the little screen and think "How the fuck does this even work?" and have to end up asking for help anyway . . . so you may as well have just let the staff member hold your hand right through the process anyway. Less humiliating overall!

Sharing is most definitely NOT caring
I hate that you effectively have to share a lane with another group of people. I know you have your own lane, but the way it's set up with the seats facing each other and you sharing a bowl machine (I have no idea what the technical name of it is!) it does feel like you're having your party invaded by another party. Especially when they actually do take over some of your space. As you may know about me, I am not a fan of people invading my personal space.

The machines don't make sense!
So you'd think in this day and age that you could throw a ball down your lane and it would actually return to your side of the machine right? Why doesn't it? To me, the tussle for bowling balls with the people in the neighbouring lane is definitely exacerbated by this issue. Which leads me onto . . .

People and their balls
Seriously, why do you need so many bowling balls within your party? There's space for like, what, five balls on each side? Do you really need more than that? You know they come back to you (mostly - refer to previous point) after you send them flying down the lane, right? You don't actually need ten spares . . . pun not intended! Oh, and while we're on the subject it would be nice if you put your chosen bowling balls back where you got them when you were leaving so that the next lot of people who want to use the lane don't have to try and work out what ones were yours so they can move them without stealing the balls that their neighbours are using. Just a thought!

Ball thiefs
I know there are a limited amount of bowling balls available, especially in certain sizes. But don't just come up and take a bowling ball from someone's lane without asking first.  And if you see the person in your neighbouring lane using a certain bowling ball all the time and have taken a fancy to it for some reason . . . GO AND GET YOUR OWN rather than using it when it's your neighbours turn so they have to wait around for it. One time the fella and I were at the bowling and the two older couples we were facing kept using the one bowling ball I had brought into the lane (before they turned up, might I add!) even though they had brought over a selection of completely different weights to this one before they started playing! Infuriating.

Faulty machinery
THREE TIMES there was an issue with our pins yesterday, and we had to wait for help. One of the times it even involved a technician having to look at it in around the back of the lanes. The third time it happened we didn't even know if that was it fixed and my sister finally took her shot hoping that there wasn't some poor guy in the back who was about to be attacked by her bad-ass bowling technique! We don't think there was . . . but then maybe he just hadn't been found by the time we left. We didn't hear any screams anyway so let's assume it's okay!

The price
Is it just me who finds bowling ridiculously expensive? We paid 36 pounds for three games, and because there was only two of us, it was over in an hour. And it would have been less time if it hadn't been all the waiting around for our lane to be fixed. Literally the only time I think you can get a discount in our local bowling alley is if it's your birthday . . . so I guess the best solution for me would be to make friends with people who like bowling who have birthdays coming up! Good plan, Paula! :-)

What do you think? Have I hit the nail on the head with these (Or I guess this case the question should be "have I hit the pin with the ball with these!)? Have I missed any? Please feel free to share in the comments section.
Posted by P at 3:58 pm 5 comments:

Email ThisBlogThis!Share to TwitterShare to FacebookShare to Pinterest
Labels: the one where i rant and rave

I’m a wee bit obsessed with Pinterest. I don’t really understand how it actually works and I’m not really sure if I actually care that I don’t . . .but I really just like drooling over pictures of food on it.
I’m also a teeny bit in love with cashew nut butter. (Remember the time I made cashew butter cups? Sometimes I still think about those. Mmmm . . . )
These two admissions seem unrelated but, trust me, they’re very much interlinked. 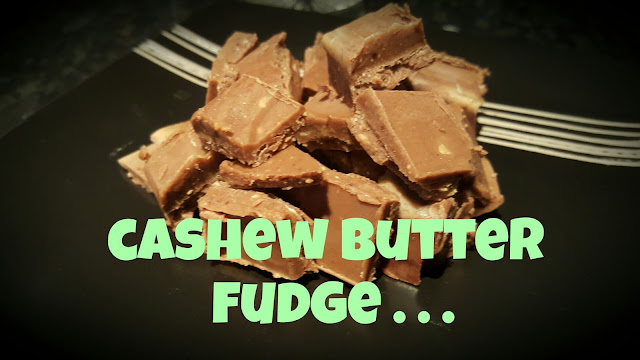 Back in January while planning my latest health kick, I was browsing through Pinterest for healthy recipes while drinking some bottles of Mixed Fruit Kopparberg (like one does!) when I happened across some recipes for healthy peanut butter fudge. Now, I’ve made peanut butter fudge before but it included the slightly more processed version of peanut butter and icing sugar, so I think we can safely assume that it was not a healthy variety! These versions were much more natural and unprocessed, and I immediately wanted to try to make some for myself.
The problem is that I never seem to have the correct ingredients for these kind of recipes. I’ll have coconut flour and oil when a recipe calls for coconut butter or sugar, I have no clue what liquid amino even looks like, and I use a stick blender whenever a food processor is called for – usually with mixed (pun not intended) results. So I looked through loads of recipes, couldn’t find any with ingredients that completely matched the current contents of my kitchen, and decided to improvise.
The results were good, but I forgot the recipe. So I kept meaning to recreate it, but that pesky thing we call life kept getting in the way. But the fella has been trying to quit sugar of late, and when he bemoaned not being able to find sweet things to eat, I decided this was the ideal time to try and make it once again.
And so, ladies and gents, I present to you . . . cashew butter fudge!!! (So good it had to be introduced in bold.) 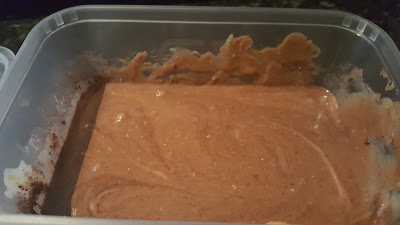 The pros? It’s delicious. Absolutely delectable. It’s sugar-free. It’s even vegan, I believe.
The cons? It’s more-ish. Oh so very more-ish. And even though it’s full of good ingredients, these ingredients are pretty much exclusively high calorie ingredients. So you really don’t want to eat too much of it. Also, it’s not particularly portable – you’re going to want to keep it in the freezer when you’re not storing it in your mouth and stomach. 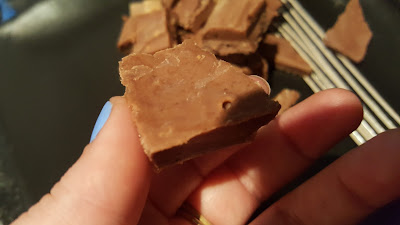 The method is ridiculously simple. Just put all the ingredients in a bowl and mix it together. (I stuck the cashew butter and coconut oil in the microwave for 20 seconds just to soften it a bit first and make it easier to mix – the other ingredients mixed in without any difficulty!) Pour into a plastic tub once it is mixed and let it set in the freezer before breaking it up into pieces. (If you’re as lazy as me, you could even mix it IN the plastic tub you’re going to put in the freezer and it means even less dishes!)
﻿

Anyway, so I'm just off to the freezer. For some . . . frozen vegetables?

Who am I kidding? I'm off to cram the rest of the fudge in my face. See ya!