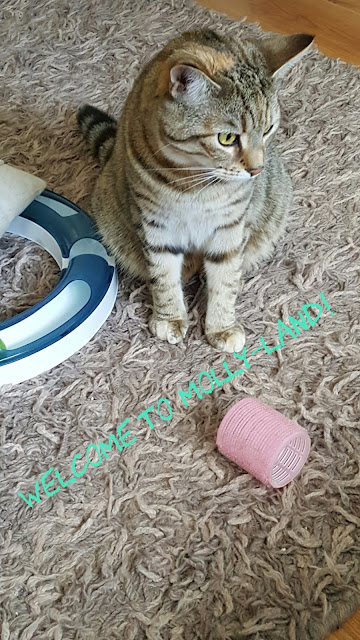 Me and the fella have been at my sister's flat for the past few days, catsitting, while my sister and brother in law are in Spain. Lovely though she is though, there are a couple of disadvantages to it.

I feel like I get nothing done when she's around

I know cats are meant to be independent but I feel like I spend most of my time in the flat trying to entertain her or watch her to decide whether she wants entertaining. In the  few days I've been here I've gotten behind in blogging, reading blogs, even tweeting. And when I exercise, she appears next to me and watches me like I'm absolutely mental so I end up feeling self-conscious and stopping. Shamed by a cat - shame on me!

I'm a bit allergic to her

I probably am allergic to cats and didn't realise sooner as I've never had a pet and, until Molly appeared in my life, never had extended periods of access to one. But around her I get runny eyes, runny nose, a wheezy cough . . . and the closer I get to her, the worse the symptoms are. Which is a shame because I absolutely love her and want to give her cat snuggles. (Yes. I went there. I said "cat snuggles". Don't start me.) She's the only reason I've ever had need to take anti-histamines!

I have instructions about how much to feed her and that's fine . . . . it's good to have guidance about these things. But the packs of food are so small and I just feel like she must be starving all the time. Last night I went straight out after work and felt so guilty when we didn't get home until after ten - she'd not had a feed since half eight. She seemed fine with it . . . but I wasn't. And when she starts staring at her bowl and then purring beseechingly at me I just feel like my heart is breaking for her.

I don't think I even need to go into this one in any detail. Thankfully we've only had to do that once so far.

Molly isn't an outdoor cat, which is a good thing . . . because I sometimes lose her in this two bedroom flat. More often that not, if I can't find her, she's either on top of the wardrobe, or in her little den (which is under a sheet on top of the sister's exercise bike). But there's so many nooks and crannies she could potentially be in that sometimes it can take me a while to find her! And this leads me on to my next point . . .

When I wake up in the morning, I don't know where she is. If you don't leave the bedroom door open, apparently she used to cry outside it, so we don't risk that. So I don't know where she is . . .  and I hate that, because it freaks me out a bit. The other morning I peeked out from under the cover and she was just sitting next to me on the bed STARING at me - I nearly jumped out of my skin! Plus she then winds her way between my legs as I try to get to the kitchen to get her food . . . does she want to kill me before I can feed her or what??? 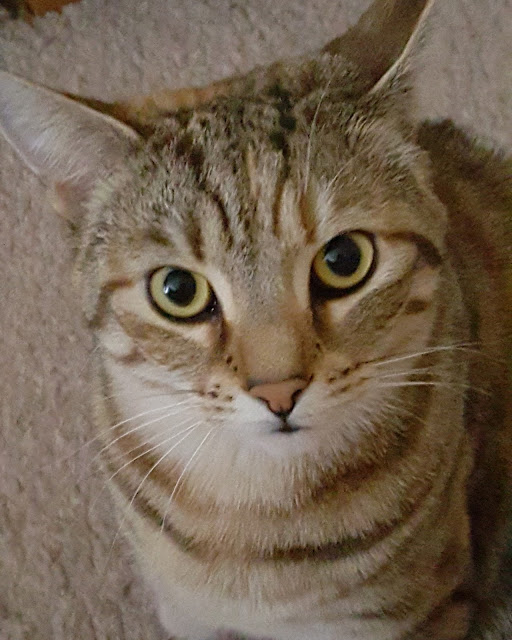 But despite all this she is bloody adorable and I love her to bits. Pets are pretty damn awesome. <3 p="">
Posted by P at 5:30 pm