It's time to tell you the story of The Joker.

The Joker has proved to be very lucky... for me anyway. Back in December last year, a mere couple of days before Christmas, I won the Joker, much to my amazement and delight. Then, five months later, I had barely arrived in Corfu for my holiday when I got a phone call to tell me that I'd won The Joker again.

The Joker has been good to me.

Because of it, I won more than 1400 pounds in less than six months. So I can hardly speak ill of it!

But what is it?

It's a fancier version of a raffle, to put it basically.

So you get a group of people together. Say, in my case, your department at work. Or perhaps you are part of a sports club. Or some other sort of group. Buy some raffle tickets and a pack of playing cards. Remove a joker from the pack so that only one remains. And once a week, at a set time, sell the raffle tickets a pound a pop. People who are "in" on the game, can buy as many raffle tickets as they like. The more you buy, the more odds you have of getting your name pulled out that week.

Later that day, have a time set aside for doing the draw. Pick a name out of the hat. (Or, in my work's case, a DHL flyer bag.) The person who is picked then chooses a card blindly. You could have the cards laid out face down. Or you could just get the person to cut the pack and then turn a card over.

If the person picks the joker, they win all of the money. If they don't, the money rolls over to the next week and the raffle starts again.

If they pick an ace, they get a tenner... but in my work an ace has actually picked less times than the one Joker. Weird eh?

Once someone picks the joker, they win ALL OF THE MONEY!

And that's happened to me twice. In a row (the second time I was picked out, I obviously was not there, so someone picked the card on my behalf, in case you're wondering. I'm sure I couldn't have been that lucky myself twice!) . So I've been sitting it out since then so I can give someone else a chance... and I just want someone to win so I can get another shot at it!

The Joker is not my idea, or the idea of anyone I work with. I've had a look around the internet and it seems the Joker is quite a popular competition.

Email ThisBlogThis!Share to TwitterShare to FacebookShare to Pinterest
Labels: i like to spend money, money makes the world go around, random

HOW MY SMARTPHONE RUINED SCRABBLE . . .

I love the internet. I love my smartphone. I love social networking. I just love how much easier life can be sometimes due to the technology we have, literally, at our fingertips.

You don't need to wait around for ages waiting for your friend because she's late but has no way of letting you know because neither of you have a mobile phone, like back in the olden days. Or, more likely you do still have to wait around for her because she's ALWAYS BLOODY LATE. . . but at least you have the option of spending the twenty minutes or so she's been delayed on your smartphone Facebook-stalking or moaning about bad timekeepers on Twitter.

But . . .I've spoken before about how much I love modern day technology but that it's a double edged sword at times.

And I discovered a few weeks ago that technology has ruined Scrabble for me!!!

Me and one of my uni friends used to play it all the time back in the day. I loved it back then, but hadn't played in years. Then the "Words with Friends" app came along and I would play it religiously. It never took over my life the way Draw Something did for that brief horrendously dark few weeks back in 2012. (I can never go back to that place. *shudder*). I could dip in and out of it, play a few shots a day, or loads if I wanted. I probably had the app in my phone for about three years, then my phone kept running out of space so I eventually sacrificed it, probably for a video clip of a goat skateboarding or something ridiculous that you shouldn't ever sacrifice your Words with Friends app for.

Anyhoo, I digress. A few weeks ago, the fella suggested we have a game of Scrabble. As in the actual board game. I hadn't even known he owned the game, and I hadn't played it for probably around fifteen years so I was pretty excited. We broke out the vino because you obviously can't play a board game without alcohol (don't even get me started on the time I recently played Monopoly sober and got very stressed out!), and got down to the nitty gritty. 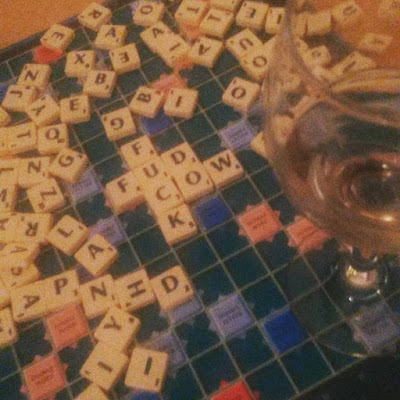 But Scrabble is hard now.

For a start, you have to actually pick tiles out of the bag physically. They don't just line themselves up on your screen randomly at the touch of a button.

And that's just the tip of the iceberg.

How do you know that perfectly crafted word you have spelled out on the tiles is even real? Do you have a dictionary? You can't really look it up on your phone or you might be accused of cheating! If you're playing Words with Friends it will tell you whether it's a valid word or not and you don't need to risk the humiliation of not having spelled a word correctly in front of other people.

Scrabble does not afford you such a luxury.

And if you are lucky enough to find yourself in the possession of a correct word, you have to count the score for it up all by yourself. All those double and triple letter and word scores do not add themselves up in the real world.

This is when you start to realise that perhaps Scrabble and wine do not in fact go hand-in-hand.

And the worst bit of all?

You don't really have a clue whether you've won or not until you actually get to the end and the scores have been counted!!!

So, go on technology . . . what olden day pleasure are you going to ruin for me next???

Email ThisBlogThis!Share to TwitterShare to FacebookShare to Pinterest
Labels: alcohol rocks, random, the one where i rant and rave

EVERYWHERE YOU GO, ALWAYS TAKE A WETHERSPOONS WITH YOU!

There's people out there who love a classy wine or cocktail establishment. I do too. But when it comes to having drinks out, I have a confession to make.

I love a good 'spoons.

By which I mean, I love Wetherspoons. The pub chain. (Although I do love a good spooning too.) 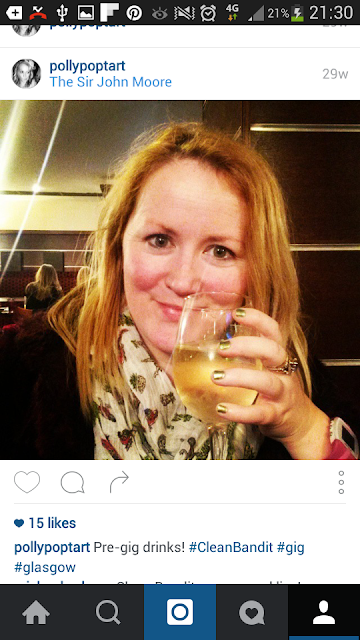 That's not even a secret confession because I think pretty much anyone who is my friend on Facebook or follows me on Instagram knows this due to my frequent check-ins and "arty* wine portraits" at whatever 'Spoons is closest.

*When I say "arty" I probably mean "drunken".

Anyhoo, I've always been a loyal frequenter of the 'Spoons franchise in Glasgow, but around a year or so ago me and the fella went for a drive down to England and wound up in Carlisle. We decided to go for a drink, but where to go? When you're in a strange town or city, there's pub politics - you don't know what pubs are good or bad, which ones are must-visits or must-avoids. As a Glasgow dweller, I know that there are many pubs there to be avoided depending on religious and/or football affiliations, for example, but I don't have that luxury in a place I don't know.

But when you check online and there's a Wetherspoons in close proximity, all of your problems are solved. Cheap wine, and fairly decent pub grub if you aren't of the "eating's cheating" mentality. Usually okay loos as long as you don't mind a long journey to them (have you noticed they're almost exclusively up or down a set of stairs from the rest of the pub?) Friendly service and a wide variety of customers. And free Wi-Fi!What more can you ask for?

So the night of the England trip, we had facebook check-ins in both Carlisle and Dumfries. And so The Great Wetherspoons Tour began!

We made it our mission to find a Wetherspoons, if possible, in every UK town or city we stayed in from that moment on. We even managed to take it a step further and stay in a couple of Wetherspoons hotels! Which, by the way, are pretty awesome - they are actually really well kitted out and aren't expensive. Especially if you stay there on a Sunday night as they seem to exclusively cost £39 on that day. I've been to the ones in Broughty Ferry (just outside Dundee) and the Inverness one and they are both lovely. Highly recommended, plus you know you have a pub nearby since you're staying in one. 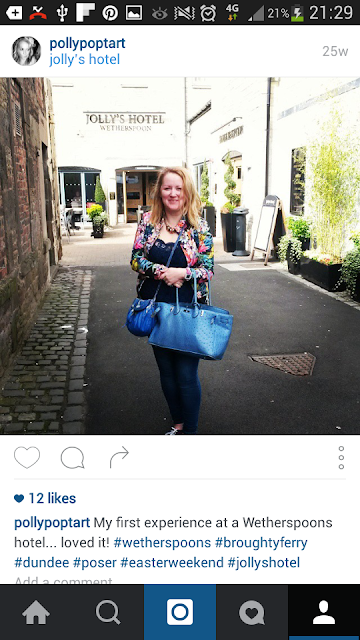 Funnily enough, in the past couple of days, two separate people have asked me how many Wetherspoons we've been to now. We realised that we'd actually forgotten to count. So we will need to make a list at some point. But there is a lot. And this will continue to grow!

Believe it or not, this is not a sponsored post. Although if anyone who works for a 'spoons happens to be reading this and fancies offering us some free wine or a hotel stay, I would not be saying no by any means! ;-)

We're Wetherspoons-aholics. And we're not ashamed to admit it. Are you?

Email ThisBlogThis!Share to TwitterShare to FacebookShare to Pinterest
Labels: alcohol, alcohol rocks, I love rose wine so much I devoted a label (and post) to it
Newer Posts Older Posts Home
Subscribe to: Posts (Atom)