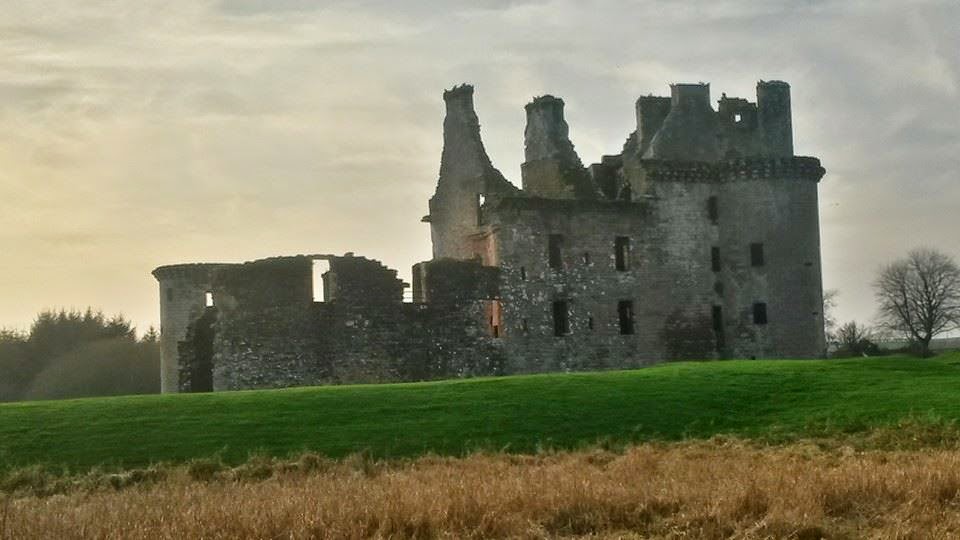 As you probably already know, me and the boyf like to get out and about in Scotland. So when himself heard that many of Historic Scotland's attractions were going to have limited free tickets available this weekend due to St Andrew's day, we decided to try and visit a few.

Although I had never heard of it, I spotted Caerlaverock Castle on the online map with available tickets and snapped up a pair for us. We ended up getting a bit carried away and getting tickets for another two attractions too - it was a bit like Groupon for castles really, except without having to pay anything at all!

Caerlaverock Castle was my favourite though. I wish my pictures could have did it justice, but the pesky sun kept getting in my way, and my phone kept deciding to switch itself off. 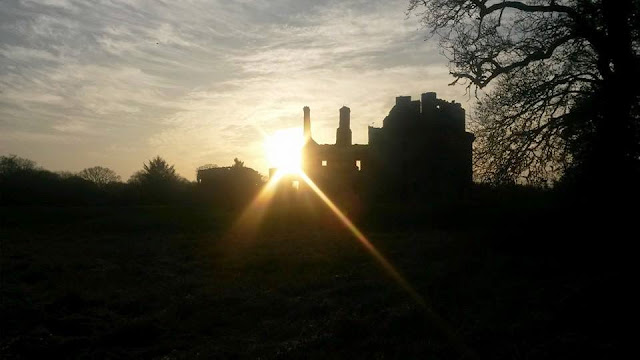 Located close to Dumfries and close to the Scottish-English border, Caerlaverock Castle has been subjected to many sieges throughout its history, and has lain abandoned since the 17th century. Obviously, not all of the castle is still there, but the part that remains was pretty cool to explore. 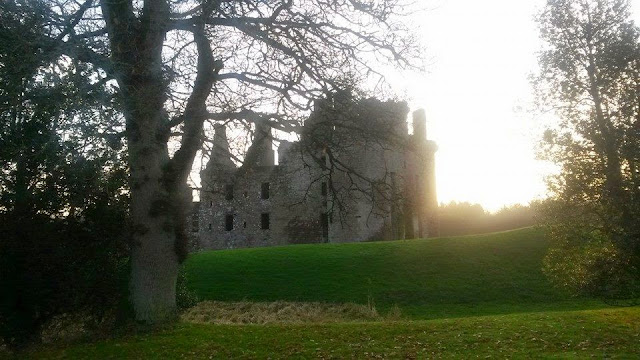 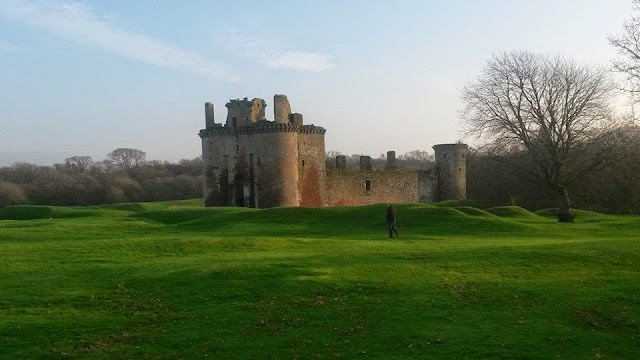 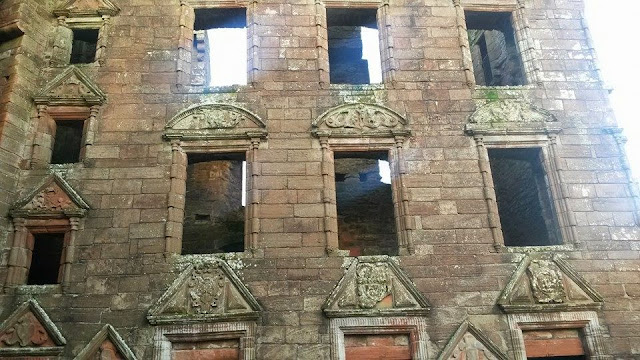 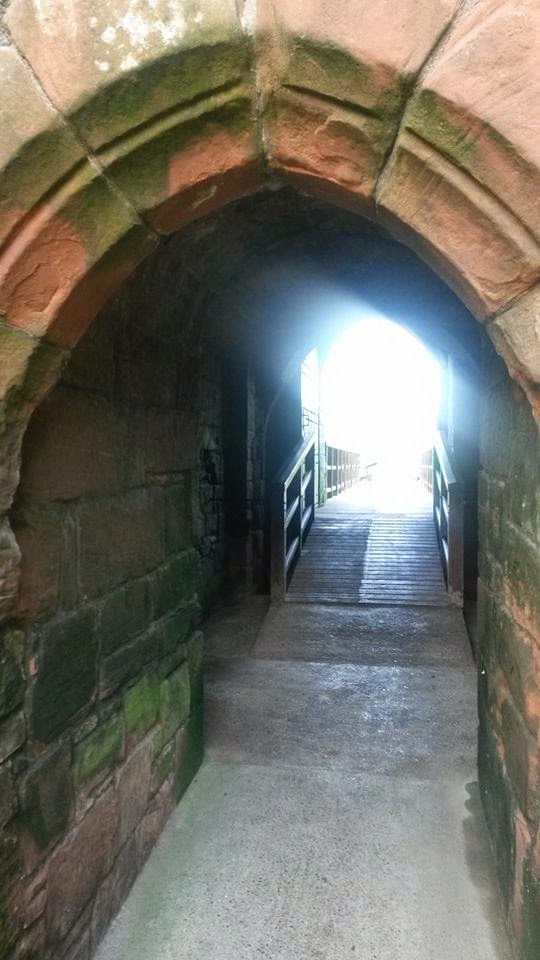 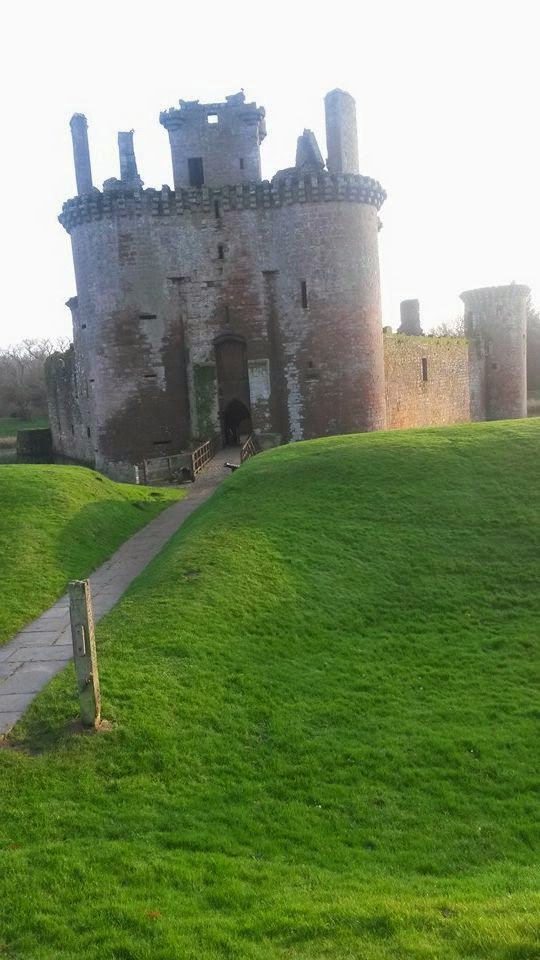 Obviously we got in for free, but its normally only £5.50 for an adult, and I actually do think it would be worth the fee if you wanted to visit! There's lots of little nooks and crannies to wander around, a little walk you can do to the site of the original version of the castle behind, and a wee exhibit and video you can watch about the castle's history. Although we were there a bit later on in the day and there weren't many visitors at this point, there were a couple of kids having a great time inside the castle playing hide and seek, so it's good for the youngsters as well. (Just make sure they don't fall in the moat!)
For more information, you can visit Historic Scotland's website here.
What's your favourite old building?﻿
Posted by P at 10:15 pm No comments:

Email ThisBlogThis!Share to TwitterShare to FacebookShare to Pinterest
Labels: Scotland the Beautiful, Scottish and proud of it

Well I think so anyway. I know there are people out there who don't really get social media. My entire direct family, for example. (Although I recently realised my dad is on facebook, much to my surprise.) It took me about six months back in 2007/2008 to talk my sister into getting a Bebo page . . . I had to help her set it up but I think about two weeks later everyone had moved onto Facebook as the social media site du jour so she immediately lost interest.

It was a very sad moment for me as I thought I was so close to getting her properly into social media. I was like the opposite of a proud parent. Anyway . . .

I guess when you blog you're even more likely to get into the world of Facebook and tweeting because there's a bit of self-promotion involved in all of these things. But I know that's not the only reason why people like them. I probably spend a lot of time on both Facebook and Twitter and I can see the good and the bad in both. I think a lot of people on twitter like to rag on Facebook a bit - and I can certainly see why. Facebook probably isn't as cool. There isn't as much wit on there as there is on Twitter.

But I suppose that's why I sometimes prefer Facebook.

For one thing, if I have something to say that I think may make people laugh, I'll pop onto twitter, flex my finger muscles over my tweetcaster app, and then draw a blank. I am meant to somehow transform and more than likely truncate my hilarious pithy thoughts into 140 characters? How is this possible? I mean, I could spread it out over more than one tweet - and I often do - but somehow this seems to soften the point or decrease the humour.

On Facebook there isn't this same character limit . . . I can make my hilarious anecdote as long as I want! I can accompany it with a photo . . . also without compromising the number of characters. Hell, I can add an entire ALBUM of photos to go along with it if I want. I mean, it probably will take away from the value of my oh-so-cleverly worded statement, but it's an option!

Also . . . people seem to find me funnier on facebook. I'm not sure why. But on the occasion I've posted the same thing on both twitter and facebook, I've got a much better reaction on facebook. I don't seem to have that same appeal on twitter!

I also like Facebook for storing photographs - it basically is my version of an attic filled with old pictures and photo albums. Except much more easily accessible, and with far less spiders and other potential creepy-crawlies and rodents. (Apart from the odd creepy guy hitting on me, that is... Ba boom TISH.)

But for every plus, there's a negative to balance it out and there are just as many things that annoy me about Facebook. I HATE HATE HATE the game invites. They are probably the bane of my life. In fact, as I have typed this post, I received several game invites through on my phone. It's a shame because I usually love invites . . . but not in that area of Facebook. I have no interest in playing Magic Town or Candy Crush or PissoffpleaseVille. And I don't like getting a notification on my phone and getting all excited (it makes me feel popular) only discover it's one of these turds. Not cool.

I also feel like I can post more frequently on twitter if I want. On Facebook I tend to limit my status updates and posts, and sometimes don't post anything for days. I used to be worse, and post every single thing that came into my head. Until a girl I know through my sister mentioned she'd had to hide my posts because I was "always on there". With twitter, I feel I'm among like-minded people who also like to post every thought they have ever had on occasion!

Sometimes I can't be bothered with either of them, mind you. And lately my love of Instagram has taken over from them both - I even played a #FirstWorldInstagramProblem hashtag game, mainly with myself, on Twitter back at the start of the month. If you didn't see it on twitter or (gasp!) don't follow me,  maybe I'll share it on here sometime. Somehow, at the moment, it's more fun to post pictures of every item of food I'm putting in my mouth than every thought that's in my head. I'm sure it will all balance out eventually once the novelty of that wears off though!

Do you ever wonder if any social media site will come along to eclipse Facebook or Twitter? I can't see it - of course, sometimes I'm so caught up in my own little social media whirl that there might already be one there and I just haven't noticed it! Obviously the aforementioned Instagram is up there too, but it has its own little niche different to what Facebook and twitter have to offer.

Maybe the three could join and form some sort of Supersupersocialmediasite???

I really hope not though.

Email ThisBlogThis!Share to TwitterShare to FacebookShare to Pinterest
Labels: apropos of nothing

Okay, so I'm totally paraphrasing the title from a Friends quote . . . you know the one? Where Monica and Chandler are on honeymoon but keep getting usurped for all the perks of BEING on honeymoon by the same couple just in front of them all the time?

I feel like that a lot. Not in terms of a coupley way. Just that someone always seems to get to something right before I get there. Like basically the second I show an interest in something, someone else spots that interest and tries to jump right in there first.

Nothing interesting, nothing scandalous. I'm talking the banal stuff in life here, but that's what probably makes it all the more annoying!

For example, say I need a cash machine. I can see that one empty cash machine in the vicinity, winking away at me like a mirage in the middle of a dessert as I walk towards it. No one in front of it, no queue . . . until I'm approximately 5 paces away when some absolute BASTARD just materialises in front of it. And more than likely still has to pull their purse/wallet from the depths of their bag, before they proceed to pull out all five of their cards to check their balance on each and every one. When my transaction would have taken me a mere thirty seconds . . . suddenly a five minute wait is tacked on to the start of it.

The queue in Partick station . . . where they inexplicably only ever open one window for train tickets and don't have a machine you can use as an alternative. You can guarantee if you are in a rush for the train, the one person who materialises in front of you will be the person who is trying to buy the all-around-the-UK ticket and trying to pay for it in one and two pence coins. While wearing mittens.

The empty bar that suddenly becomes busy the second you reach it when you're gagging for a drink. The only other person in the shop who beats you to the only shelf in Superdrug where you could find relief for your dodgy stomach. Then proceeds to just stand there while you writhe in agony behind them, cursing them for life.

Worst of all, the person who walked into the chip shop two paces in front of you... who then gets the last available chips so you have to wait extra time for the next lot to be cooked. (Although the one advantage there is at least you get the freshly made ones, I suppose.)

This can't be just the story of MY life surely???

Email ThisBlogThis!Share to TwitterShare to FacebookShare to Pinterest
Labels: the one where i rant and rave 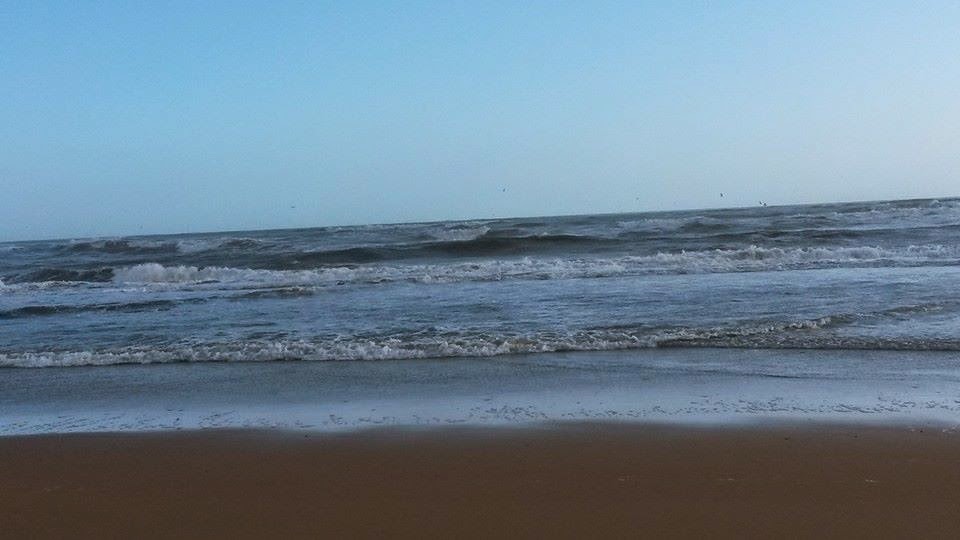 A couple of weeks ago, me and the boyf headed up to Aberdeen to celebrate our one year anniversary together (I know, can you believe it??? Me having a one year anniversary!!!). One of the places we decided to go was Balmedie Beach, which is a couple of miles north of the city. I'd been recommended to go there by a couple of different people, and it was unseasonably warm for Scotland in mid/late October, so while we were hardly going to be sunbathing, it was still not too cold to have a wander about.

And it was really lovely! 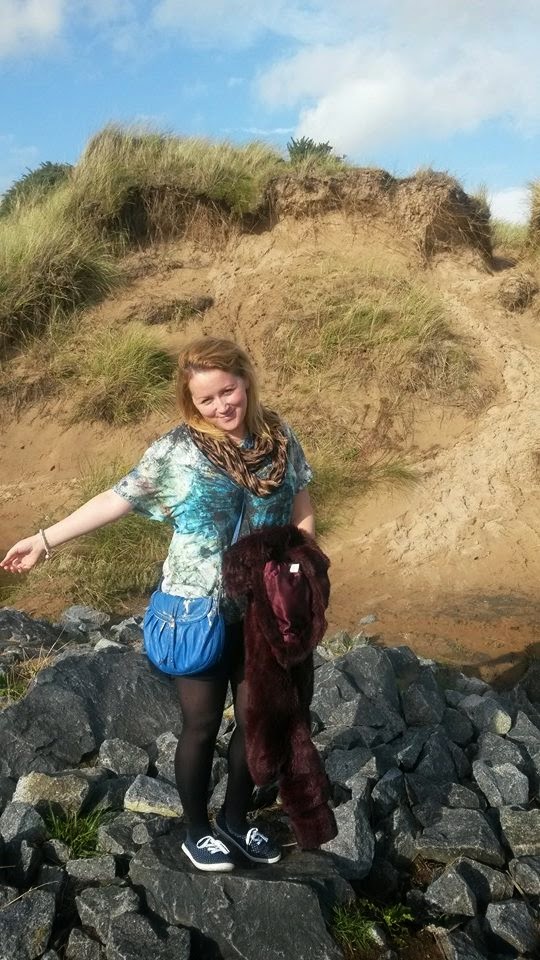 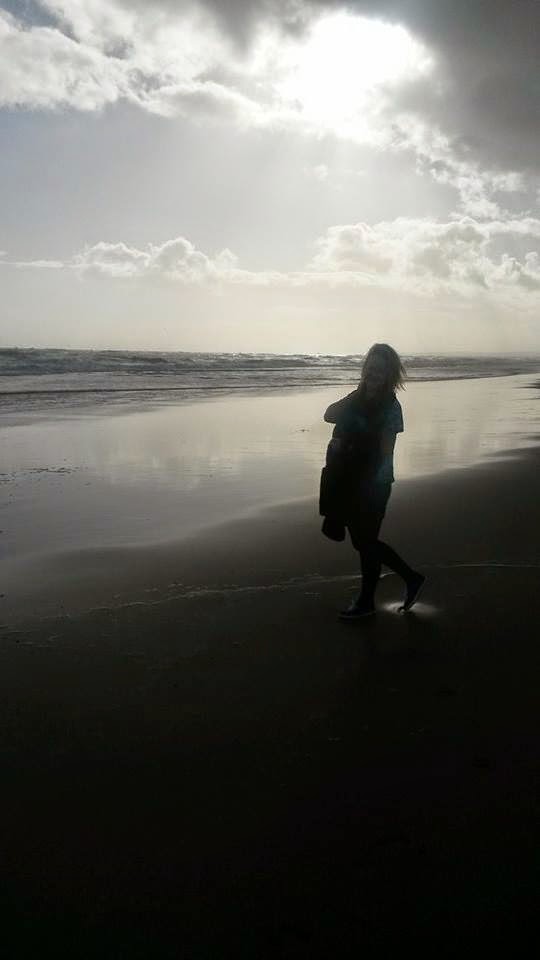 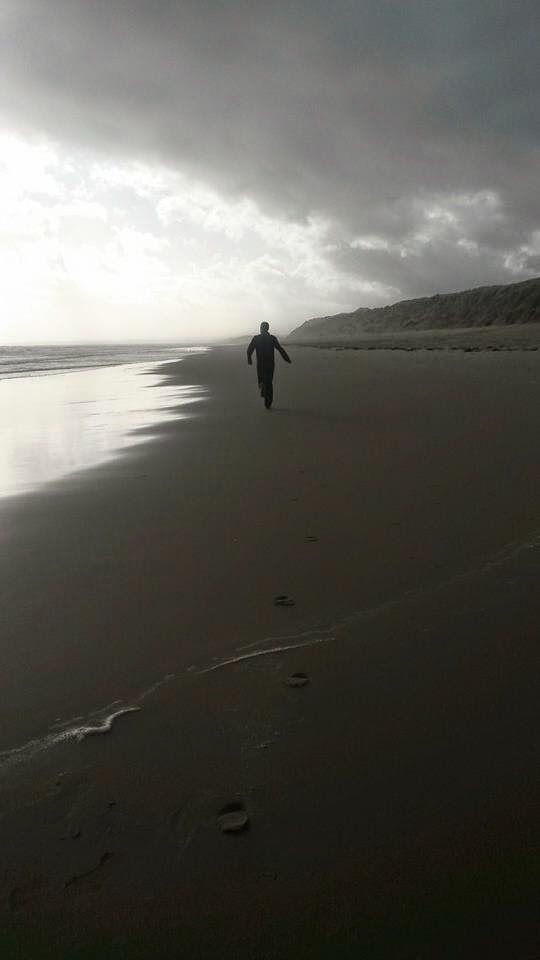 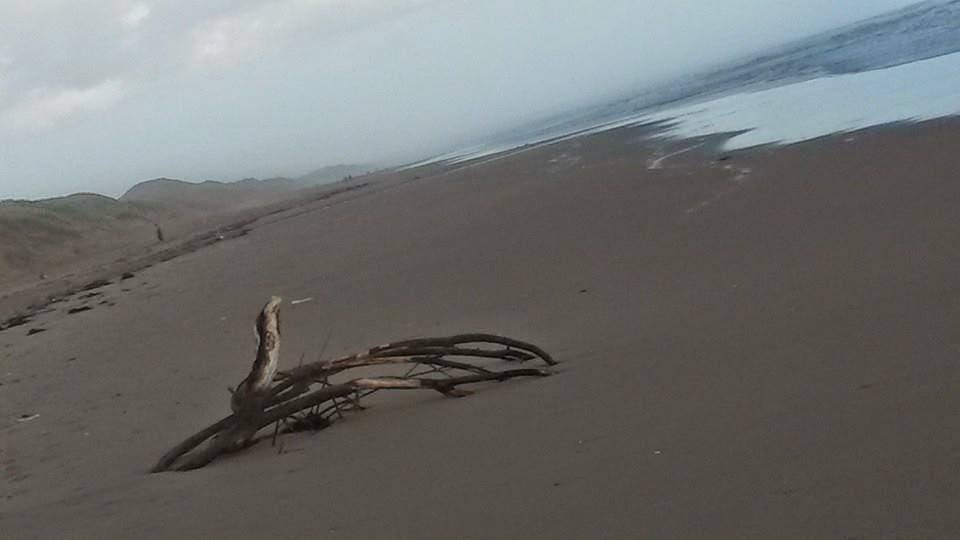 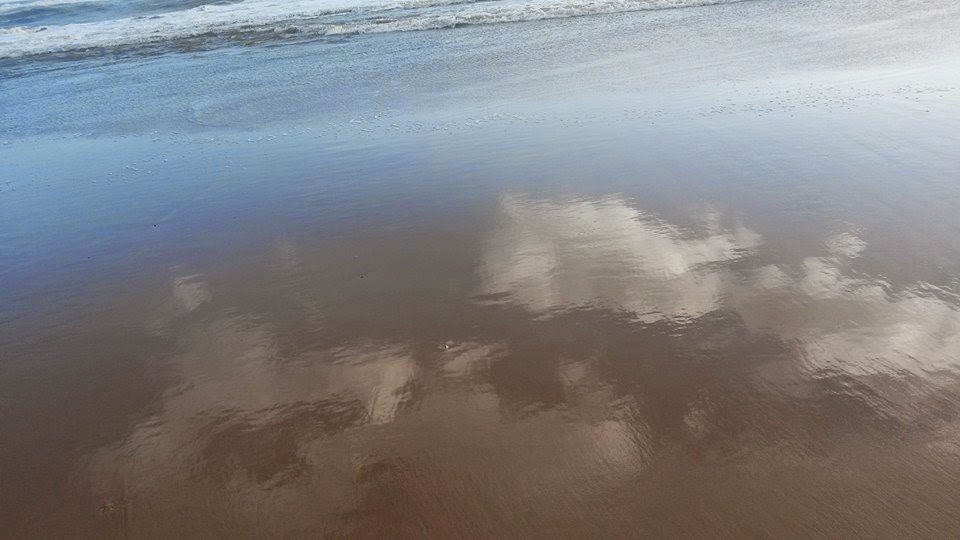 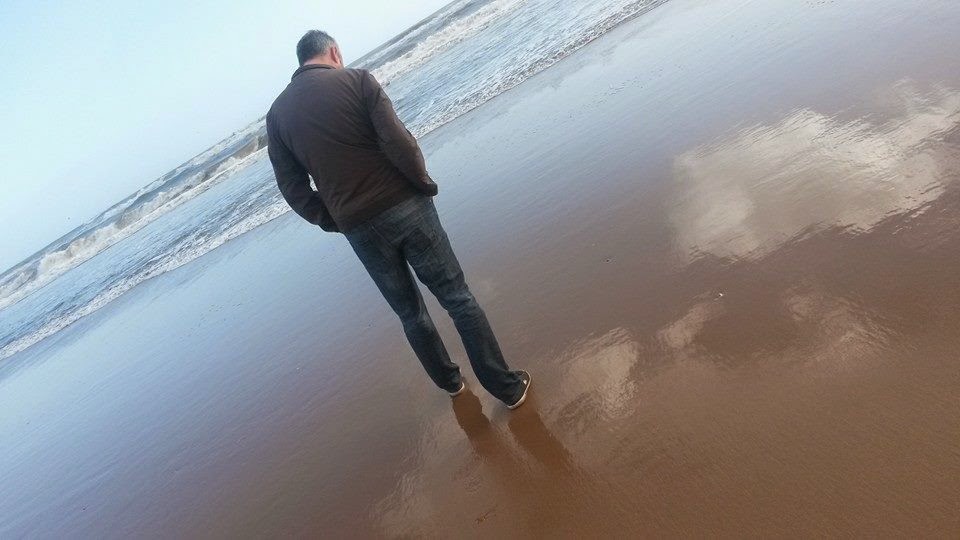 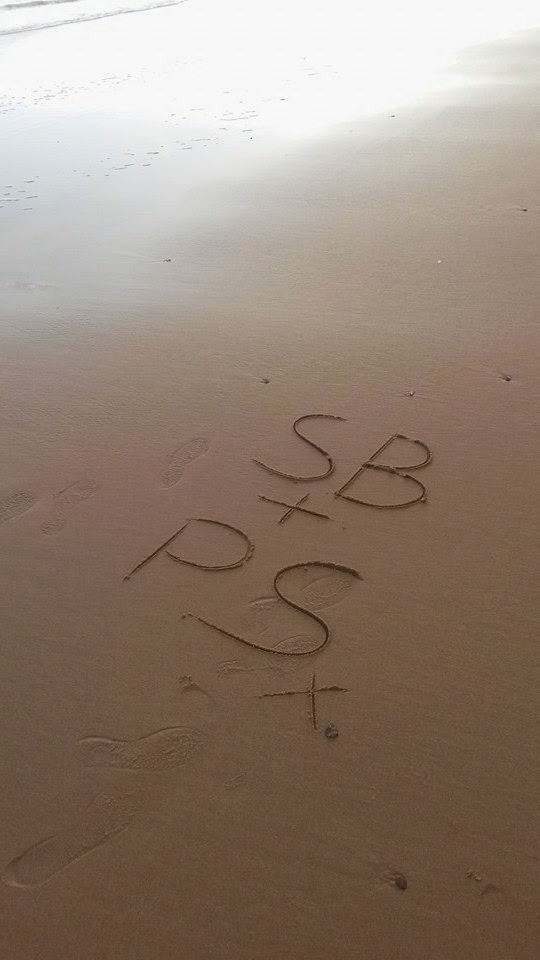 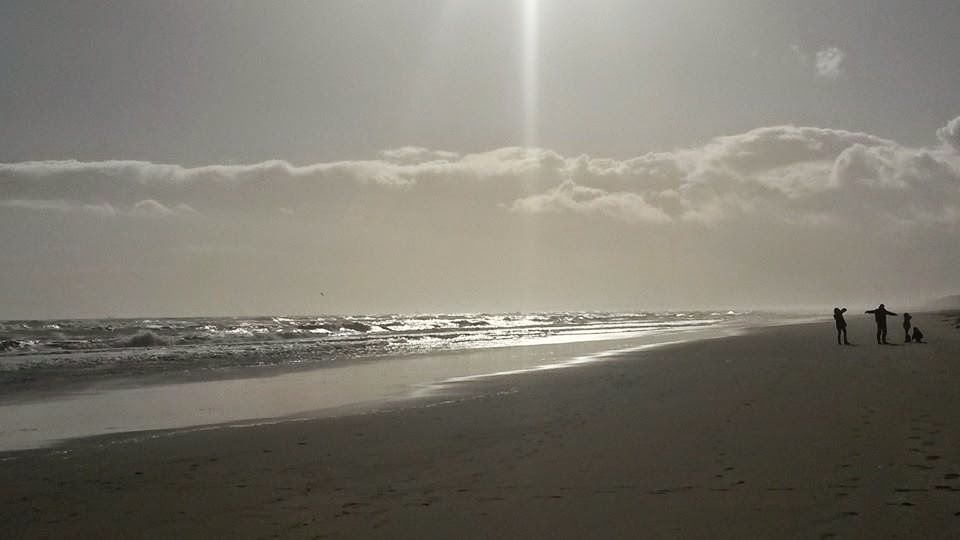