Scotland is awesome and it's time to show you more of it! The other week I showed you Puck's Glen, near Dunoon - next up is the place I visited the very next day . . . Loch Skeen.

Now, getting to the loch wasn't the easiest as it basically is in the middle of a bunch of hills . . . we had to walk up the side of a waterfall to get to it. And it wasn't the easiest of walks, especially because the path was narrow, and steep at times, and also there were a couple of times when the drop was pretty sheer . . . and I'm not the best with heights. But it was worth the view when we got up there finally!

Loch Skeen feeds into a waterfall called Gray Mare's Tail, which is situated near Moffat in Dumfrieshire. We had visited Gray Mare's Tail once before but the weather had been shite and we had taken the other path, which was cut off to the public after a certain point as it was dangerous. We had determined to come back to do the other path the next time we had enough time to do so and the weather was okay.

When we finally rounded a corner and the loch opened up in front of us, it was breathtaking. If a little boggy. Which I learned after I stepped right in a particularly boggy bit and nearly lost a shoe! 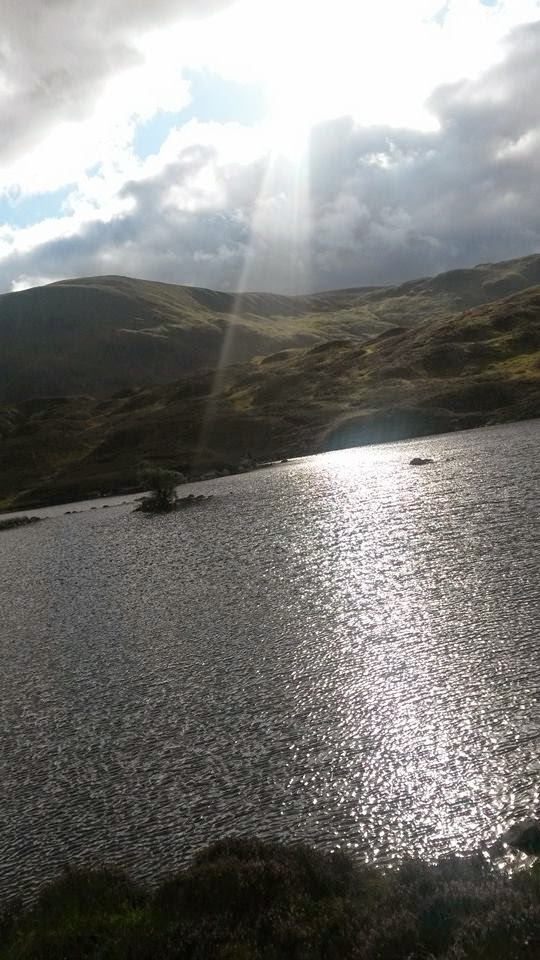 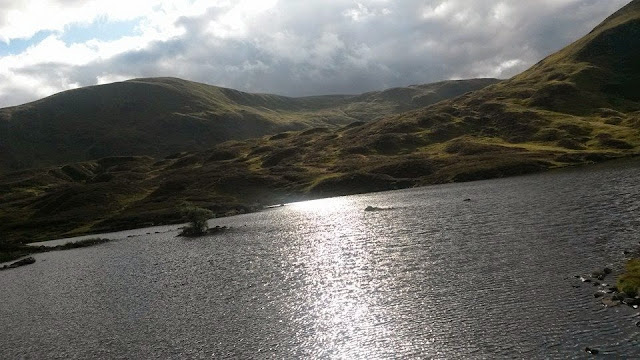 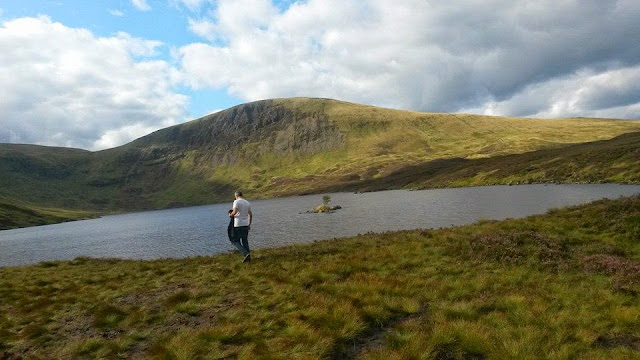 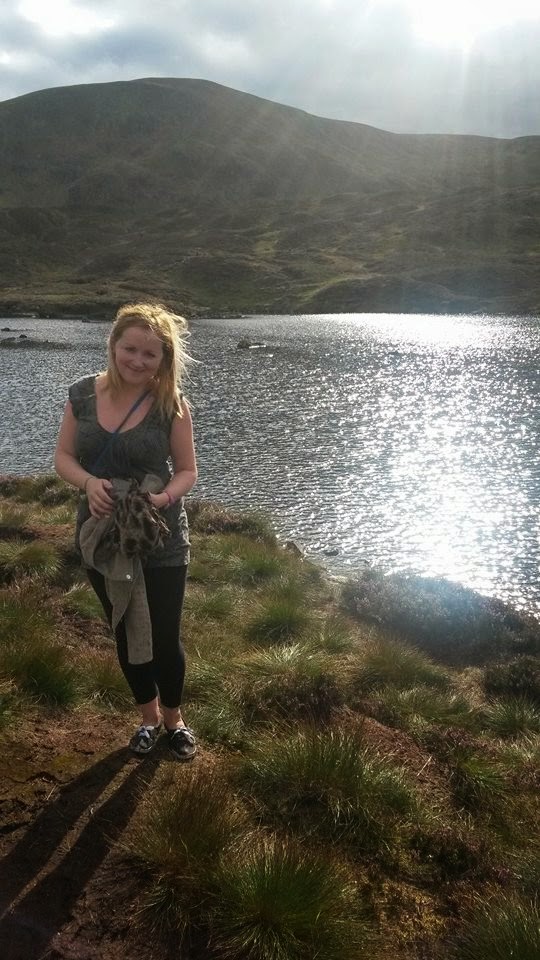 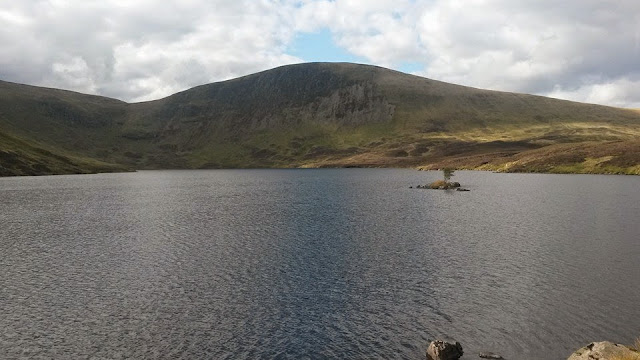 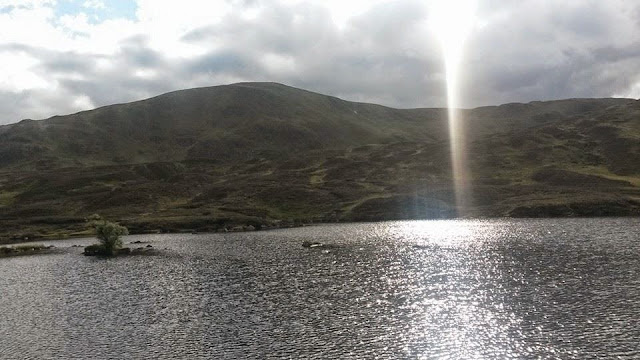 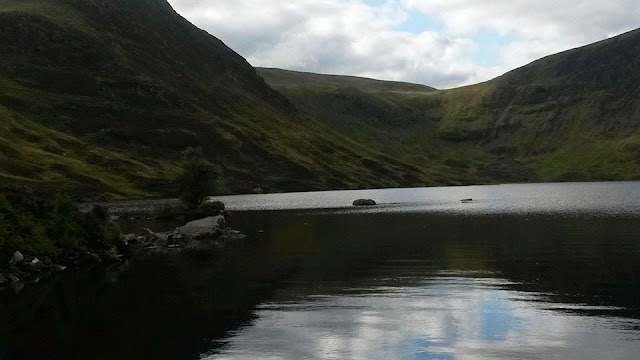 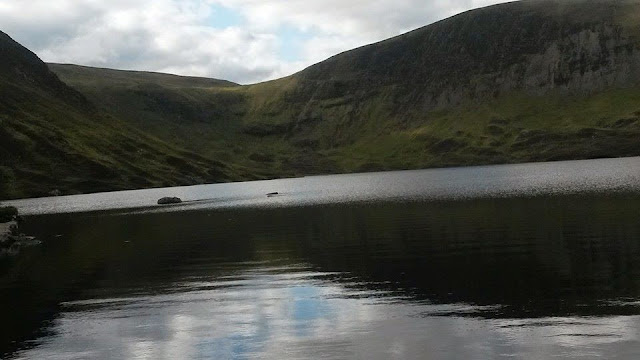 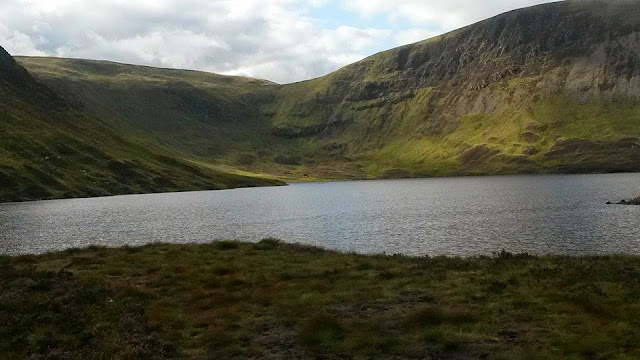 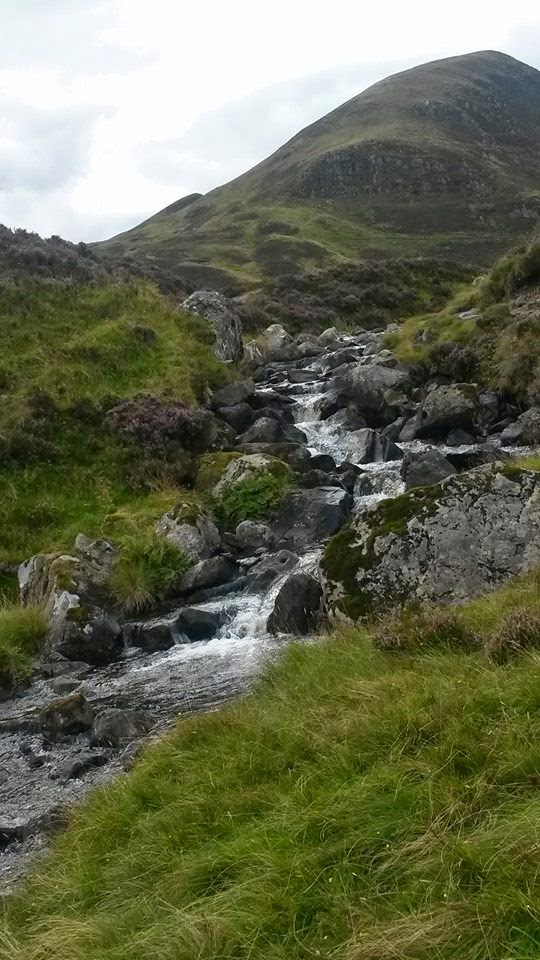 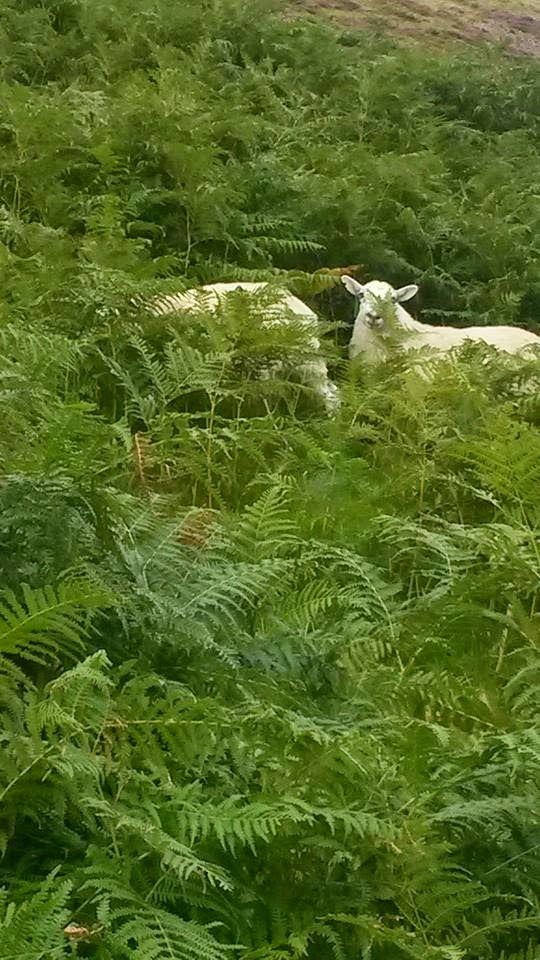 We met some sheep on the way back down, although they kept their distance... 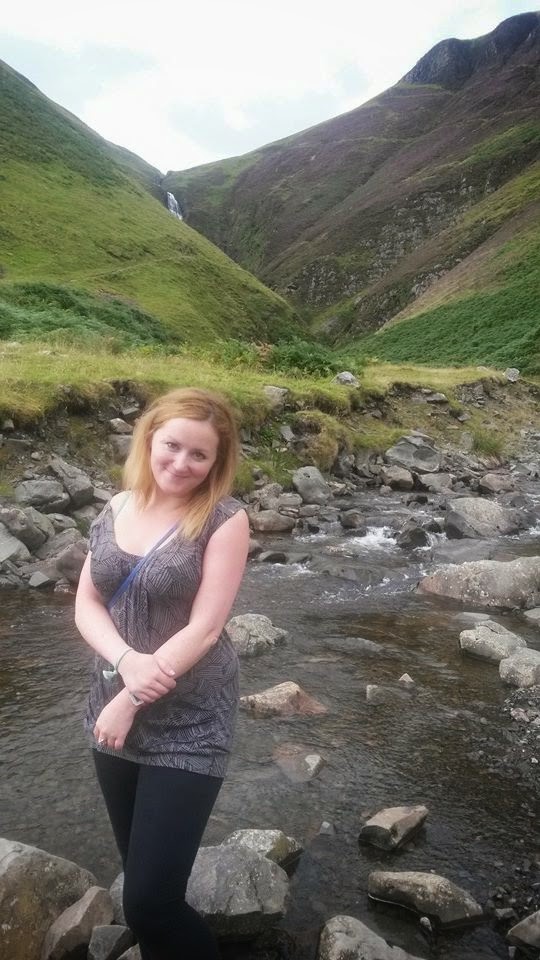 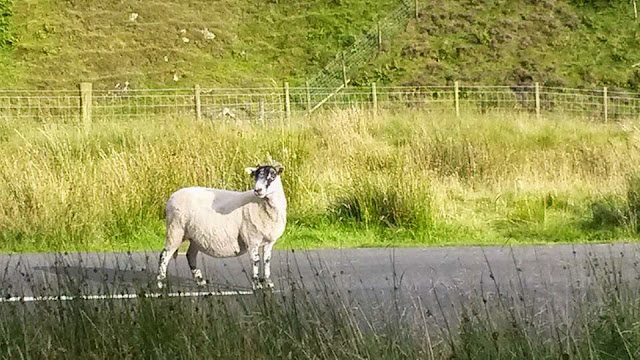 This sheep actually stopped and posed for a picture! 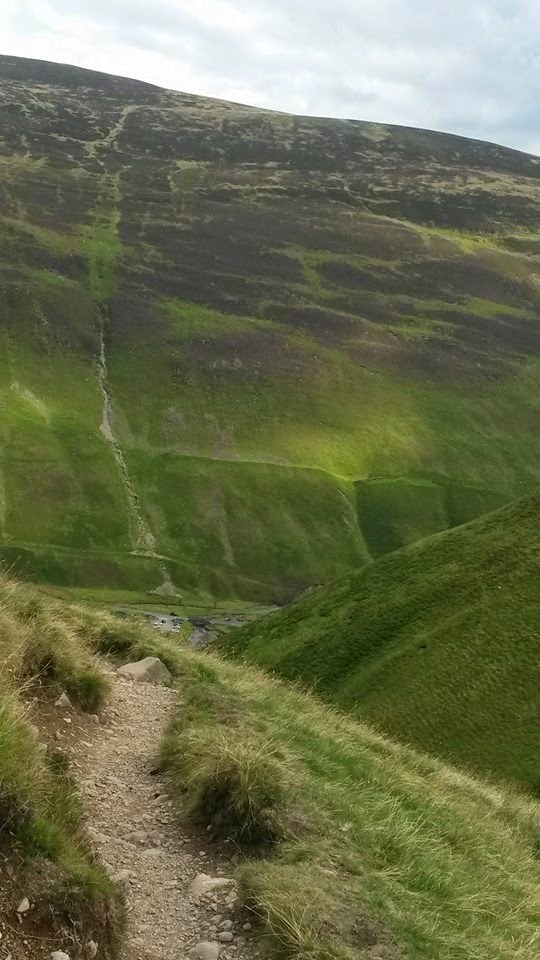 I would definitely recommend this walk - it is definitely worth it for the view. You can find out more information here: http://www.walkhighlands.co.uk/galloway/grey-mares-tail.shtml
Posted by P at 2:00 pm No comments:

Email ThisBlogThis!Share to TwitterShare to FacebookShare to Pinterest
Labels: Scotland the Beautiful

THE ONE WHERE I TAKE THE PISS OUT OF THE PATRONISING BT LADY . . .

You may or may not know that a week today we're having a little vote in Scotland... well, actually it's a pretty big vote on whether we vote yes or not for an independent Scotland or not. I'm not going to assume any other country necessarily cares though - that would be arrogant of me to do so. The nation has been pretty divided on the whole thing though. Personally, I'm planning to vote yes, but I don't believe in forcing my beliefs down other people's throats. It's up to everyone to make their own decision.

But I digress. Something which was a major talking point a couple of weeks back was the patronising, condescending, chauvinistic "No" advert that Better Together brought out. "The woman who made up her mind." Did you see it, or hear of it? It had people on both sides a bit appalled.  It was so awful that it spurned an entire hashtag on Twitter devoted to the "Patronising BT Lady" as she was so dubbed. Watch it here if you want.

Anyway, various piss-takes and spoofs have been flying about in among the backlash. This was my favourite:


And the other night, I decided on a whim (a bit of a tipsy whim, admittedly) to make up my own piss-take, using my own favourite subject - wine!!! Hope you enjoy...

Did you see the Better Together advert featuring the patronising BT lady? What did you think about it?
Posted by P at 10:56 pm 1 comment:

Email ThisBlogThis!Share to TwitterShare to FacebookShare to Pinterest
Labels: alcohol rocks, appropros of nothing, I love rose wine so much I devoted a label (and post) to it, sometimes i watch television

"So Katie Hopkins has put on three Stone just to prove how easy it is to lose it again? What a fucking idiot. At least she won't need to turn to laxatives... so much shite comes out her mouth she'll probably lose all the weight in a week!" - me, last night

So Katie Hopkins is at it again.

And this time, the professional rent-a-gob is having a go at overweight people.

Fantastic, right? In her latest project, she has DELIBERATELY put on over three stone just so she can prove 1) how easy it is to lose weight and 2) claim that people who can't lose weight are just making excuses.

What a saint this woman is, right? How very good of her to teach us how to lose weight! Let's forget about those people who actually do  have conditions which make it hard for them to lose weight. Let's shame everyone struggling to lose weight just so she can get another fifteen minutes of fame on top of the half hour or so she already didn't deserve.

The quote at the top of this post was my status update on Facebook last night. In 24 hours, 48 people have liked this status update. Much as I'd like to think otherwise, I think all these likes were less to do with my rapier-like wit, and more to do with a mutual hatred of Katie Hopkins.

Why do we keep giving this woman a platform to spew her bile? Is it because we all really need someone to focus our hatred on? Why else do people keep inviting her on shows to say something destined to rile at least half the nation? Why am I maliciously hoping she fails spectacularly in her plan to lose all of this weight again in the same amount of time she put it on, so she has to eat her holier-than-thou words (thank goodness words are calorie-free, right?)? What shite is she going to come out with next?

And why am I even wasting this rant on her???


What do you think of Katie Hopkins, and this latest project???


PS I'm over on Dawniepopsies blog today talking all about one of my favourite subjects... food. And maybe wine too. Go check it out here.
Posted by P at 10:48 pm 2 comments:

Email ThisBlogThis!Share to TwitterShare to FacebookShare to Pinterest
Labels: the one where i rant and rave
Newer Posts Older Posts Home
Subscribe to: Posts (Atom)