Do you remember my attempt to give up wine two years ago? I lasted two weeks, my vodka tolerance went way up in the meantime (well, I wasn't giving up ALL alcohol!), and I discovered nights out in the pub were hard when there was no alcoholic beverage other than wine that I could stick to for extended periods of time. I used to give up sex . . . but only if I was single. And as for chocolate or crisps . . . there just isn't a hope in hell.  (Well, I could POSSIBLY manage crisps. I don't eat them often. BUT, if told I couldn't have them, I would most definitely suddenly want to eat them ALL OF THE TIME!)

This year, I will most certainly be not giving up wine. Or chocolate. Or cakes. Even if I THOUGHT it was possible, I will be in Paris before the end of Lent and I can't see myself avoiding any of these things. Someone today said he had given up fizzy drink for Lent one year . . . I don't think I would make it through the first hour of caffeine withdrawal headache. :-(


So I've given it some thought and here are some things I could probably give up for Lent instead:


VEGETABLES - I know we're meant to get our five a day and all that . . . but it's so easy to forget so I think I could just keep forgetting and manage the full 40 days. And then probably keep going for the rest of the year. In fact - let's live really dangerously and throw in fruit too. I'm SUCH a risk-taker!!!

WATER -  going to the loo all the time is such a hassle anyway. Totally overrated. And . . . I've said it before and I'll say it again, ad nauseam . . . Jesus turned water into wine for a reason.

SHOWERING - we all know my feelings on showering. If you don't, you may get the hint after forty days of me avoiding it.

EXERCISE - as long as lifting a wine glass to my lips doesn't count as exercise, I think I could manage this one without too much hassle.

SAVING MONEY - I know it will be REALLY hard to just spend money without thinking about it, and not think about the repercussions, but I will do my best. I will put my all into it. I will buy holidays and clothes and books and tickets for things and I will HATE EVERY MINUTE OF IT. Honestly!!!

On second thoughts . . . maybe I'll just not give anything up at all.

Email ThisBlogThis!Share to TwitterShare to FacebookShare to Pinterest
Labels: alcohol, apropos of nothing

Now, you may remember years ago I made comment about Valentines Day and how much I hate it. If you don't remember, you can find it here.

I may be in a relationship now, and slightly less cynical than I ever was, but I am still a bit anti-Valentines Day. So me and my boyfriend agreed to do a card and a little gift, but not go out. Seemed like an okay compromise.

I've never in my life made anyone a mix-tape. But it seemed like a good idea. I had been on the Not On The High Street website looking for ideas for something I could buy - I'm absolutely USELESS at boy presents. But then I saw you could BUY a mix-tape online through the site. I liked that idea but then I thought.... I can do this myself, and it'll mean more. So I did.

It's relatively easy, just choose some songs that mean something to you both, or your relationship, buy a blank cd online, find somewhere you can download the songs from (I found a website which would let me turn youtube links into mp3s then I was able to burn them on to a CD) , make a cover and voila! Okay, not QUITE as easy as that, I did put quite a bit of work into it.... but I was proud of the finished product.

A mix-tape is a fun idea and I like the fact that it actually MEANT something. 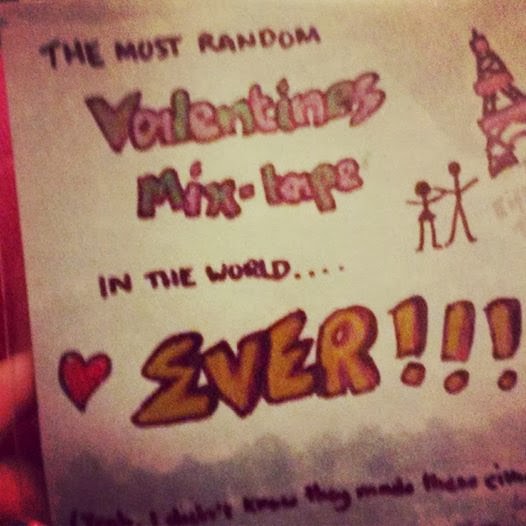 Did you do Valentines gifts? And have you ever made anyone, or been given, a mix-tape?
Posted by P at 7:01 pm 5 comments:

A RANDOM LITTLE RANT ABOUT SOME WORDS . . .

Here is a random selection of words and a rant about them. Some are common mistakes, some are not so common and some are just horrible HORRIBLE words. Okay, ONE is. But I feel very strongly about that one word.


"Specific" and  "pacific"
I don't understand why so many people say "pacific" instead of "specific". Is it just the way they say it that makes it SOUND like "pacific" or do they really think that is another use of that word??? I hate to break it to you, but even if you're talking "pacifically" about the largest ocean in the world, it still should be "specifically". The end.


"Narcolepsy" and "Necrophilia".
A friend of mine years ago was talking about always being tired and half-jokingly said she thought she might have a case of narcolepsy.  However, she referred to this condition erroneously as necrophilia. There was a bit of shock until she said "that IS the condition where you can just fall asleep anywhere and everywhere, right?" Those two words are DEFINITELY not ones you should mix up. Ever.


"Instant gratification" and "self gratification"
This error was my own, and I'm still embarrassed about the time I told a colleague he was the "King of Self Gratification", when I actually meant "Instant Gratification." It's a WEE bit personal for the workplace really, isn't it?


"You're/your", "there/their/they're", "its/it's"
We are ALL entitled to a slip-up, and heaven knows I've been guilty of this too (and on the rare occasion I commit this crime, I usually notice afterwards and instantly want to crawl under a rock with shame) but it REALLY isn't that hard to get the correct spelling of these words in the right context consistently. It really does frustrate me when I see the same people make the same errors with these words constantly.


"Amazeballs"
Why in the world is this even a word? Who decided "amazing" wasn't a good enough word? Who do I need to hunt down and kill? The day that word made history for going in the dictionary, I had to explain to a colleague what it meant. The fact I even KNEW what it meant resulted in a very bleak day for me.

What spelling/grammar mistakes, or words annoy you SPECIFICALLY??? I can't be alone here!
Posted by P at 10:26 pm 6 comments:

Email ThisBlogThis!Share to TwitterShare to FacebookShare to Pinterest
Labels: the one where i rant and rave
Newer Posts Older Posts Home
Subscribe to: Posts (Atom)