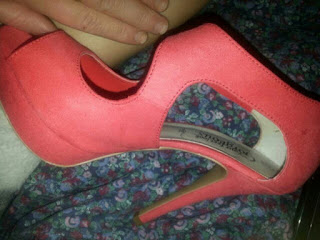 So this weekend it was one of my favourite people's weddings . . . the wedding of the lovely Miss Smidge and her almost-as-lovely man B. I'd been looking forward to this day for ages . . . although I just couldn't find a dress I really loved to wear to it. Finally, a week before the wedding, i found one. (I'll post a pic eventually but I didn't take any photos myself stupidly, and currently the only picture of me floating around the netasphere from the day is rather an incriminating one. More on that later.)

The ceremony was lovely. I've never been to a humanist ceremony before (I've only been to a handful of weddings in my life and I don't even usually get to the ceremony part, just the afters) and it was much more emotional than I expected. I found myself getting a bit teary-eyed at some of it. A few bits. But then that's the sign of a good ceremony I'd say. On top of that, Miss Smidge looked absolutely stunning - I can't even describe how amazing she looked. You'll just have to wait for people to post the pictures!

Then.... there were the canapes and free-flowing prosecco. Dawn positioned us near the food. Happily, this was also close to the prosecco. That was nice. Although I may have overdone my consumption of that.

My shoes were amazing. I felt about twelve storeys high. Of course, that meant I was going to feel like I was FALLING twelve storeys when I inevitably fell. Which I did, of course. The aforementioned alcohol took the edge of that, thankfully, although that won't stop the bruises that have developed on my legs since.

As one of the few single girls there, I was seated between the two ushers at dinner. Of course, this meant it was inevitable (that word once again) that I was probably going to pull one of them. Just snog them, obviously. Nothing more. As I said to Dawn the following morning, even if I'd taken one back to my room it would have been a "Oh hi, now you're here, can you help me unzip my dress and now let's just kiss and snuggle for a bit." (I was worried I wasn't going to be able to unzip my dress while inebriated. It was hard enough to do so while sober. As per my tweet below)

Might have to pull at @miss_smidge 's wedding just so i have someone to unzip my dress for me. It's hard! #thatswhatshesaid #smidgewedding
— Pollypoptart (@Pollypoptart) January 31, 2013

I'm not really sure what my pulling technique was to be honest. Probably if I DID know I could bottle that shit and sell it. But I don't so this is probably why I'm still single. Or maybe I had nowt to do with it at all. I just know that 1) I did really quite fancy one of them and 2) I then did a disappearing act.  Shortly thereafter me and Dawn decided we would go back to our hotel for a bit (it was just next door) and next thing I knew I had woken up on the floor and she was on my bed. So the night ended with me lying in bed next to Dawn eating McDonalds that her boyfriend had fetched for us (thank you, thank you, thank you!).

So in my head I will re-write history and I am going to choose to think of myself here as the mysterious Cinderella-esque type who got her snog and then mysteriously disappeared from the wedding. In reality though, I'm probably the girl who slurred out a bad chat-up line, jumped a guy, then probably fell over and ran away with both shoes still on, leaving prosecco fumes in her wake, and a picture of the snog on twitter (thanks to Dawn) where you can't tell where my tongue ends and his begins. Perhaps that's the modern day Cinderella! I'm okay with that, haha.

Weddings are fun for that.

Email ThisBlogThis!Share to TwitterShare to FacebookShare to Pinterest
Labels: alcohol rocks, boys, friends, I love rose wine so much I devoted a label (and post) to it

*like therapy but just involving crying as you realise all of your life's bad decisions.

I've not had the worst time so far this year (especially considering it's been January for most of it so far, officially the most likely month people decide to end it and that) but the last week has unexpectedly been somewhat of a rollercoaster of me.

There has been no trigger as such. It's just not worked for me.

And I'm just missing. very much, what I can't have.

Why is life so fucking damn buggering hard???

If someone can give a decent answer to that, I'll do my best to get you canonised. (If you don't believe in that shit, I'll try and get someone to give you a tenner. Hopefully not me, cos i'm skint.)
Posted by P at 12:29 am 1 comment: