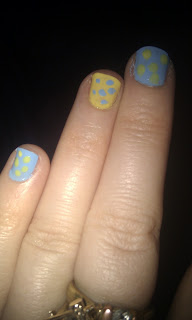 I'm gonna keep this brief today as I have spent a long day traipsing around Edinburgh without much to show for it (seems silly to go to E-town when Glasgow is up there in the best shopping cities in the 'Kingdom, but sometimes us faux-Weegies need a change of scenery) apart from some stuff from Primark and a bottle of wine . . . the upshot is I can't be bothered spending ages uploading photos - why does it take so long??? But I haven't brought out an "issue" of The *Nail* On Sunday since before I went to Belfast so I figured I needed to at least make a half hearted attempt at one.

This look came about mainly because I had a yellow Barry M nail polish that I always really wanted to use but it just does not suit my skintone AT ALL. I figured, if I wanted to use it, I would have to use it as part of a pattern to tone the scariness down a notch. I figure this attempt worked . . . and it is a pretty pastel look for summer. Oh, and it's mega easy. I don't even really feel like it needs instructions!

But it uses two colours . . . Barry M's Lemon Ice Cream and Barry M's Blueberry Ice Cream (I may have mentioned before that this colour is my very favourite of nail colours). I just put on a coat or two of each on alternate nails, then dabbed on the other colour dot-style, finishing with a layer of clear nail polish once dry. As that annoying meer-kat would say "simples!"

I would like to apologise in advance for the fact that the nails are a bit messy around the edges. I did this look a few months ago now and I was possibly drunk when I did it. (Is anyone REALLY surprised about that "revelation"???)

Next time I'll try for something a bit more elaborate. I promise! In the meantime, can anyone point me in the direction of some easy but pretty nail tutorials?? I need some nail-spiration!
Posted by P at 8:55 pm 4 comments:

Email ThisBlogThis!Share to TwitterShare to FacebookShare to Pinterest
Labels: The Nail On Sunday

I'm off to London for work tomorrow. I'm looking forward to it, but you probably know how I feel about packing. The suitcase is currently sitting empty in the middle of the floor, has been for over an hour now while I procrastinate and do pretty much anything else I can to avoid actually putting things inside it. Seriously. I mean, I even mopped the kitchen floor, for fuck's sake. I mean, it was a half-hearted attempt at best but I still did it!

I think I may have to get drunk to do it. After all, everyone knows that boring tasks are more fun while done a little bit under the influence. Housework, paying bills, cooking, packing . . . if you get your drink on while doing this you'll have a blast. Or it'll at least take the edge off the mind-numbing dullness, which is better than nothing.

Now I'm talking absolute shite here so as not to pack. Sorry! I'd better go and do it now I guess.

So in the space since he sneezed and I said "Bless you" and I'd ended up at his table, there was the conversation that sprang up, as he asked first of all who had won our game of hangman, then asked what I was off to Northern Ireland for, then laughed at my mispronounciation of the town "Comber" (which I pronounced like "Comb" with an "er" on the end, not realising that the B ISN'T silent in Northern Ireland . . .). Then I asked him what he was over for (after all, he was on his own) and I suddenly couldn't hear a word he was saying. So, bearing in mind I was really a little bit tipsy by then, given that all I'd eaten all day was a flapjack, had been up since six am, it was around two pm and i was onto my fourth glass of wine . . . I announced "I'll come over" and, wine in hand, circumnavigated my way around the table and sat down opposite him.

I found out a few days later that he may or may not have deliberately started speaking quietly so I would do this. I didn't mind. It was flattering.

So we starting chatting, then Mich came back and joined us and we were all getting on well and I thought "this is good - I quite like this guy and he's ALREADY met one of my friends". This is a good sign." On top of this, no matter how much i had thought i initially fancied him just based on first appearance... after talking to him I REALLY liked him. Like really really. I felt there was something there on his side as well, but I wasn't one hundred per cent sure. Most of the time I'm quite good at telling if a guy likes me (It doesn't happen often after all!) but I HAVE been wrong. Anyway, it all became clear after we docked.

Mich had ran on ahead to retrieve our care package for our friend A who we were staying with (the ferry, in their infinite wisdom, wouldn't let us bring nice bottles of wine on board with us, made us put them in the hold, unbeknownst to them Mich had vodka stowed in her water bottle - what idiots they are!). For some reason, earlier during our conversation, the matter of age had came up. It had turned out he was only 26, some six plus years younger than me. I'd ended up having to produce my passport to prove what age I was. This came up in conversation again, and I ended up jokingly using a line I have never EVER used in real life before. Well, not under these circumstances anyway.

And that was that. Then, in that moment, I established we were flirting.

Possibly because I actually said something along the lines of "Am I imagining things here, or are we flirting?"

Email ThisBlogThis!Share to TwitterShare to FacebookShare to Pinterest
Labels: boys

So it's been nearly a month since Belfast. It was fun - well, despite Mich being sick as a dog for a day of it. There was, as predicted, drinking, guitar hero, eating, zoo-visiting and . . . unexpectedly for me, a bit of a holiday fliing!

I haven't really mentioned it before as technically it was still ongoing, even after the return to Scottish soil. I don't really like talking about these things while they're still happening - it's a bit of a jinx as far as I'm concerned. But it seems to have skidded to a halt now (it was one of those ones where it was probably never going to be that practical anyway and i couldn't really see it lasting - it was more just a matter of just HOW finite it was going to be) so now I feel I can share it. I kinda want to, because it's a nice story. And, like I've alluded to previously, it's a story that's completely unlike me!


It started on the ferry to Belfast. He was sitting at the table next to us and asked us if we would watch his stuff so he could go outside for a fag. I agreed immediately (I think I was doing my make up or something and a bit preoccupied), cheeky Mich asked what it was worth. He took my answer (can't really blame him, lol.) After he went away, I wondered aloud if it was just me or was he quite cute. Scruffy, granted, bit more facial hair than I normally go for, but definitely cute.

But I didn't think too much about it. I don't chat up random guys. That's why I tend to end up with colleagues, ffs. Safer. Easier to get to know without pressure etc, fall for them gradually and all that. I literally cannot remember the last time I saw a complete stranger and instantly took a like to them. Somehow this was different. I realised this around the point that Mich decided we were going to play hangman and drew the weirdest gallows ever. Like hers were waaaayyyyy too realistic - she'd clearly put a lot of thought in - like how the hangman was going to get UP to the hanging part. Steps? A stool? Morbid, much? (Sorry Mich!)  After a brief argument about this, she decided to ask the guy at the next table for an opinion. When she turned back to me, he caught my eye and - I dunno - there was just SOMETHING there. Sounds mad, I know, just some sort of spark or something. But once again, I did kinda brush it off. Like you would ever start chatting someone up on a ferry, I thought. Like I would ever start chatting up someone on a ferry, in fact! Like I would ever chat anyone up deliberately, in general! I'm purely an accidental flirter.

Now . . . every time someone around me sneezes, friends, colleagues, whatever, I say "bless you" on autopilot. I have occasionally done this with strangers. Most of the time I rein myself in. But this time it came out on autopilot.

Email ThisBlogThis!Share to TwitterShare to FacebookShare to Pinterest
Labels: boys

BACK ON THE HEALTH KICK...

After avoiding it for three weeks, I made my return to the gym today. I REALLY couldn't be arsed, to be honest, I'd rather have drank cava for one more day before going back to work tomorrow, but I felt like it was a necessity. Not quite sure how I'm going to get back into a routine with three whopper shifts in a row next week (7.40am-6.10pm - ouch) as well as my work trip to London the following week, but I can't keep putting the health thing off.

It was a struggle, especially since I decided to walk there and back and it was warmer outside than I expected. BUT I managed forty minutes and feel a wee bit better about myself as a result. So THAT'S good. Tomorrow I am going to try and fit in a quick workout before my pole class too. I usually talk myself out of that one, so will be interesting to see if I make it!

In other news, speaking of the whole health thing, I'm also going to try to avoid the booze until at least next Friday. As well all know, the majority (okay, ALL!) of my previous attempts at not drinking have not worked. So once again.... this should be interesting. For now, I'm pretty much determined but give me a particularly bad day and the idea of drowning in a bottle of cava never seems like a bad one. Hmmmmm. Wish me luck anyway! ;-)
Posted by P at 5:51 pm 3 comments: