I am back at work tomorrow. But just for one day.

Technically we get Christmas Day, Boxing Day, New Years Day and January 2nd. Which means, as they all fell on weekend days this year and we're entitled to them, we got the 27th and 28th, and 3rd and 4th Jan instead. On top of that, we get three days festive leave which is for the three week days in between Christmas and New Year that are neither of these.

BUT . . . because our department is so busy, they need people into cover on these three days, so I ended up being allocated the 30th.

It's obviously kinda shit as I like to be off the whole way through the hols, and it would be LOVELY to be off all the way through from the 24th Dec to the 5th January. However, I've been trying to look at it in a positive way and think "well, the 30th is halfway through the holidays, therefore I get 5 days off followed by one day in work followed by another five days off. Perhaps it will make me appreciate the holiday more."

However, not only have the past five days absolutely FLEW by, but I've been virtually WISHING them away so that I can get my one day in the office over with, so I can be back to being off work again. So it's like I'm not really appreciating the time off. Which is kinda crap.

Anyhoo, despite me being totally aware that I'm doing it, roll on 4pm tomorrow so I can have my next five days off . . . despite this current five days not being over yet.

Do you have to work over the Christmas/New Year period? Do you mind having to do it?
Posted by P at 9:57 pm 8 comments:

Email ThisBlogThis!Share to TwitterShare to FacebookShare to Pinterest
Labels: what a way to make a living

Email ThisBlogThis!Share to TwitterShare to FacebookShare to Pinterest
Labels: music 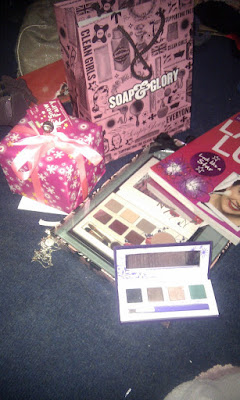 Loadsa toiletries and make up. Just what I like. :) 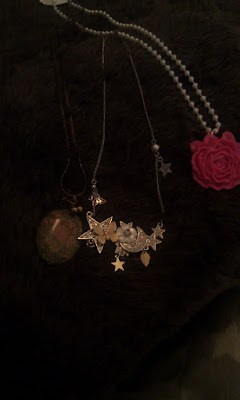 Pretty necklaces, all for me. 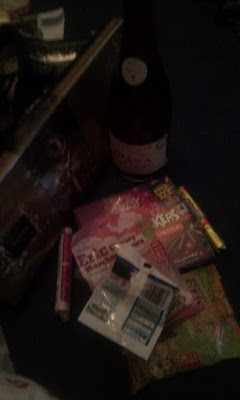 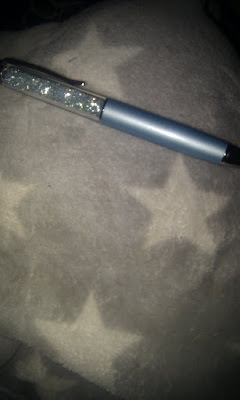 Beautiful Swarovski pen courtesy of my lovely friend V - doesn't she have the best taste? 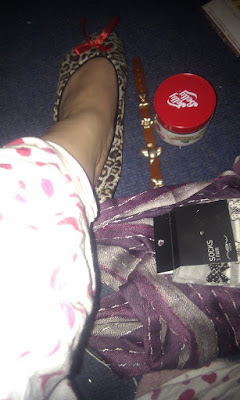 Email ThisBlogThis!Share to TwitterShare to FacebookShare to Pinterest
Labels: appropos of nothing

Being ill over Christmas sucks. And I still am. I made it to my family's celebrations anyway and survived, although I coughed all over the place so I'm really hoping I haven't spread germs as well as Christmas cheer. We got the usual random selection of food for Christmas dinner - sausage rolls, home made steak pie, baked beans, potato croquettes, bits of beef, bits of ham, creamed mushrooms . . . Yeah, random right?

Anyhoo, I'm back at my flat now, coughing away some more, already dressed in my PJs despite the fact it's only 8.15pm. Yep, I AM a party animal. Don't worry, I'm not going to bed yet, gonna break open a bottle of sparkling rose I received as a present and browse the online sales. Rock AND roll.

Expect an upcoming post on some of the fab presents I've received. And probably one on the stupid stuff I end up buying in the online sales!

In the meantime, the only other thing I want for Christmas? Is for a certain person to take the ball I've nudged into his court on more than one occasion now and confirm whether or not I am going to get to hang out with him again over the festive period. Fingers crossed for me, eh?
Posted by P at 8:12 pm 4 comments:

Email ThisBlogThis!Share to TwitterShare to FacebookShare to Pinterest
Labels: appropos of nothing, boys, health

I phoned in sick today.

I physically couldn't get out of bed - despite the fact I lay half awake all night. I weighed up whether or not I could function in work and decided it was unlikely. I also weighed up whether going out in minus temperatures would help me recover and decided that wasn't even a consideration. I remembered how I was violently sick last night with no warning, and didn't particularly want to puke in public if such an occurrence were to happen again.

So a day of hiding under the duvet and coughing was all I could think to do.

It makes me feel guilty. Partly because there is so much in work to be done at the moment (I felt especially guilty after I found out another of my team members is also off sick today). And partly because I guess that's the way I've been brought up. No one in my family is off sick if they have to be. I'm probably the worst for it out of us all, and this is only the second time I've been off sick in four years.

But the bit I hate the MOST is the actual act of "phoning in sick". Because however genuinely ill I am, I feel like the person I'm speaking to on the phone doesn't believe me. No matter who my boss is, I always feel like this. I find myself overexplaining things, I can't just say "Sorry, I won't be in today, I'm sick" . . . I have to try and give them all the details, which probably makes it sound more like a made-up story.

Does anyone else feel like that when they phone in sick? Or is it just me?
Posted by P at 1:16 pm 16 comments:

Email ThisBlogThis!Share to TwitterShare to FacebookShare to Pinterest
Labels: appropos of nothing, health, what a way to make a living

Email ThisBlogThis!Share to TwitterShare to FacebookShare to Pinterest
Labels: appropos of nothing

The snow is FINALLY starting to melt. I actually managed to walk down my street to the shop to buy wine earlier WITHOUT it being entirely an ice rink. It was a little strange, after Glasgow being pretty much white for the past fortnight. But I ain't complaining one bit.

On top of that, I get to escape to London tomorrow, which I'm also happy about. My first ever work trip to London IN DECEMBER. Only ever been in June before, so this should be good. Down there with a good group of colleagues, staying in a great location (near Kings Cross). On top of that, I get to reunite with Elle and Victoria, neither of whom I have seen since the Manchester meet-up nearly a year ago now. Can't wait! (Anyone else about???)

In other news, I am currently glued to the X Factor final. I don't really mind who wins, as long as Cher Lloyd doesn't win. I really liked her at the start, she came on and did this fantastic audition of "Turn My Swag On". But since then, she's went down in my estimation. So Matt, Rebecca, One Direction? PLEASE out-sing the arrogant little diva tonight!

Anyway, I'm feeling unusually optimistic tonight. It's December, I'm going to London, it's nearly Christmas, other things are . . . looking optimistic for now. We'll have to see.

Of course, there IS the fact I have to get on a plane. Which terrifies me a little bit.

Email ThisBlogThis!Share to TwitterShare to FacebookShare to Pinterest
Labels: boys, sometimes i watch television, what a way to make a living

My Christmas shopping is . . . not going well. In fact, it has stalled at pretty much the first hurdle. I've not bought much at all. My brain won't work this year. I usually have it done by now. Sometimes I even have it WRAPPED by now.

So I need ideas. For websites (preferably British ones, i've left it too late for anything further away than that.) For gifts for my girly friends. For dads and grandas. For mums. For male friends. Help help HELP!!!

Even just tell me what you have bought, or are planning to buy, your friends and BFFs. Maybe it will help give me inspiration!

Then all I need to work out is where I'm possibly going to get the MONEY TO PAY FOR IT ALL from . . .

So approximately ten days later and it's STILL effin' snowing.

Seriously, how long is this going to go on for? Miraculously, my colleagues managed to get down to London yesterday as planned, after a week of stressing thinking it wouldn't happen. Today, I had to do a mad long shift (6.40 am - 5.10pm) and I slipped my tootsies into my ballet pumps (sounds mental, I know, given the weather, but they are soooo much better than gripping on ice than any of my boots) and skidded and skated and teetered my way over the ice to work, thinking "well, hopefully this is the beginning of the end of the Ice Age." (While simultaneously sweating like a pig despite the negative temperatures due to the fact I was so stressed out about trying not to fall over.)

And gradually most of the public transport in and around Glasgow was cancelled.

And it EVEN got to the point where all the Glasgow office were reluctantly told we could actually go home if we wanted. And then, despite the fact it's our department's busiest time of the year, even OUR department offered to let us go. A TRULY unprecedented move.

So I got to leave forty minutes early and traipse through a snowy/slush puppy/ice rink in my ballet pumps. Yippee!

I am SOOOO over this weather. So far it's brought me:

Email ThisBlogThis!Share to TwitterShare to FacebookShare to Pinterest
Labels: appropos of nothing, the one where i rant and rave, weather

Seriously, snow, you're pissing me off more and more by the day. The entire city appears to have shut down (well, apart from my office, where I still need to go every day. Sigh.)

But, if you are looking for ideas of snow sculptures to make, you could do worse than to try to make THIS . . .

Hi, giant "meat and two potatoes" snow sculpture!!! Let's watch while "Mum" pushes you over and kicks the shit out of you.