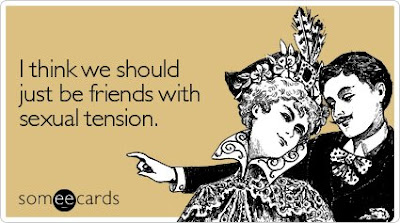 I'm writing this post right now without really knowing what the title of it is. Hopefully some bolt of inspiration will hit me between the eyes as I type and there won't be some stupid/cheesy/downright crappy title above these words as you read them. I'm not very good at titles though, so I don't hold out much hope.

Sometimes I really miss being in a relationship. I do. The main things? The silly text messages and private jokes. The cuddling. The fact you feel like someone understands you all of a sudden, perhaps "gets" you in a way no one has ever got you before. It's nice to feel wanted. Being single can be lonely at times. Pretty damn hard, in fact. Especially when it feels like everyone around you is in a relationship.

At other times, I'm perfectly happy not to be. I've said this before and I'll say it again - I don't really have TIME for a relationship. Looking back sometimes, I don't know how I ever made time. I have a fairly hectic social life a lot of the time and combined with working 35 hours a week and the fact I am essentially a loner and therefore need lots of "me"-time . . . I don't really understand how I managed to squeeze another person, another "hobby", into my life in the past, and I certainly can't work out how I will again. There never seems to be enough time in the day and, to be perfectly honest, it tends to be only when I'm trying to wind down and sleep that part of me wishes I had someone else curled around me in bed, a comforting presence to help send me to sleep.

(That being said, I'm not actually very good at sharing a bed with anyone. I like to spread out, toss and turn to my heart's content and hog the duvet cover. When it comes to bedsharing avec moi, I'm definitely hard work . . .)

There's another thing. I'm rapidly coming to the conclusion that I'm not good at relationships. Some people seem to have a talent for them, can easily move on from one to another . . . I can't do this. And I can't seem to make one last either. The guy seems entertained enough by me in the first couple of months . . . then it rapidly goes downhill from there. They lose interest, just don't seem to want to spend any time with me anymore. I can always sense the end before it happens. I can feel the guy pulling away. I start to think "fuck, why can't he just END it already, end my pain?" Yet, then when it DOES end, it still takes me by surprise, and hurts even more than I ever expected.

I don't know what it is I do to turn them off me. Maybe I'll never know. Maybe I'm destined to just spend my life drifting from one relationship to another. In fact, I can barely do that. I can count the number of times a bloke has shown obvious interest in me in the past six months or so on one hand. With a couple of fingers to spare. Actually getting INTO a relationship is even more difficult for me than keeping hold of one once I'm in it.

I mentioned last week that I was asked out. It was by the guy I mentioned that I met at the Hallowe'en party the other week. I thought about it, don't get me wrong. But ultimately I couldn't do it. I know most people would be like "Oh, it's just a date, what's the big deal?" But to me it was false pretences. Because I hadn't felt any chemistry with him. At all. He was the only single guy at the party, I was the only single girl he'd never met before - it was almost as if we had gravitated towards each other by default. In fact, if I think back, he gravitated towards ME. I tried to back off. I don't remember him making me laugh, or me feeling particularly attracted to him. All I remembered was that he was a good bit younger than me and had a little girl. (To be honest, the last thing I need is a much younger dude with baggage. I have enough baggage - emotional baggage, in my case - of my own for two people.)

I thought about it for a couple of days, but I couldn't help but compare him. To the guy I met in London, who I clicked with almost immediately in the space of a couple of hours - there was chemistry there. To my most recent ex . . . we could always find mutual silliness in even the most mundane of things, being around him you could always be guaranteed a giggle (even until recently - until he suddenly, seemingly, decided last month to drop me as even a friend.) To all the guys I've had flirtations with, however brief . . . I didn't feel anything with the guy last week. Apart from feeling like I should feel something but I just couldn't. I don't think I should go out with a guy I have no interest in, just because he's single. But I still considered it . . .

One thing that's good about our whole social-networking generation though? It's easy to weed out no-nos from potential soulmates. Man, I hadn't stalked anyone in ages, but this guy's profile was public and only a couple of clicks away and I figured since I couldn't remember much else about him apart from the lack of chemistry, that I would check his profile out. I figured that would make up my mind one way or the other. And that it did. I just saw nothing that piqued my interest, nothing that made me want to know more about him. I could only see that he called a girl a "burd" in the captions of one of his pictures (calling a girl a "bird" is bad enough but to not even spell it right???). Yes, I know, I felt like Chandler in "Friends" in that episode where it's revealed he dumps girls for really stupid reasons. But I couldn't help it. I just knew it wasn't there. I'm sure other girls would have looked at the profile and went the opposite way. But I just couldn't.

I take things too seriously I know. I couldn't tell you one hundred per cent what I'm looking for in a guy. (None of my previous boyfriends fit into the same mould, or could be remotely considered to be.) But I know what I'm not looking for. And he just wasn't it.

Maybe I'm destined to be on my own. Perhaps I'll end up being a "cat lady" (if I can be guaranteed they won't make my eyes swell up first, that is). I just don't want to be with someone just for the sake of it. I don't particularly want to get hurt again either, although I know that's an unrealistic thing to hope for, especially judging by my track record. But I'm not someone who can flit from one relationship to the next without thought for the previous one. I'm not someone who can't cope on my own - I've spent most of my life single and I'm more used to that than I am used to being in a couple. I know that there's going to be times when I'm going to want to be in a relationship - the upcoming holiday season, for example - but I suppose I need to look at the positive side. One less present to buy, for example. Free to do whatever the hell I like, go to whatever parties I choose, flirt with anyone I want to flirt with (within reason, of course). Stay in and stuff my face with chocolates if I want (hopefully the diet will be on hold at that point).

And hopefully, if (when!) I do meet someone else I think might be worth it . . . I'll not let the relationship define me like I suspect I may have in the past. Because perhaps that is what the problem has been. Perhaps that's why I have such a bad history.

Whether or not I'll ever know for definite though is another story. And I don't know what that ending will be . . .
Posted by P at 9:50 pm

Email ThisBlogThis!Share to TwitterShare to FacebookShare to Pinterest
Labels: boys, I can be serious sometimes, problems, random