So last week's post on the same subject whetted my appetite, let's call it. Because I realise just how many silly gifts can be found on these gift websites. For every gift I see that says to me "oh that is so . . . (insert friend/family member's name here)", there's at least ten more that make me think "huh?"

They may be funny, they may be cool ideas in theory, but would you really want them as presents??? 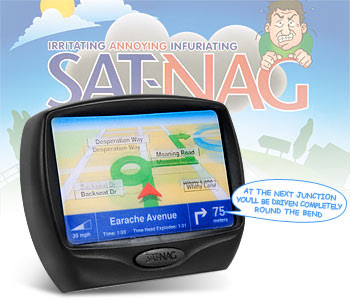 Take this for example . . . it may look like an ordinary sat-nav system (actually what the fuck do I know about cars??? I don't even have a licence!) but it's not. It's a sat-nag. Rather than giving you ordinary sat-nav type instructions like directions, it apparently comes out with gems such as "I know you're a man, but it's been 35 minutes now, so can you please admit you're lost and ask someone the way".

Now, perhaps a controversial point, but I can't help but wonder if the first reaction of a guy opening this present is possibly going to be "isn't that what my girlfriend is for???" 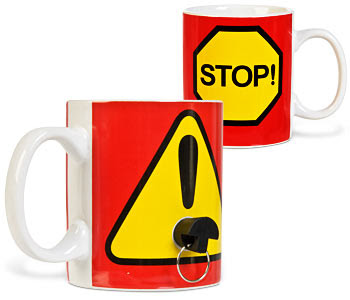 Next up . . . it's the plug mug. Genius. Tired of everyone stealing your mug in work? Well now you have one which comes with a special plug. You keep the plug on your person and then no one can drink out of it. After all you don't want the mug to leak all over you, right???

Admittedly, I can sort of see the point of this one. But what if you lose the plug? You're kinda screwed then . . .

In my own case, I'm probably just more likely to forget to put it in before I attempt to make some green tea. Ouch . . . 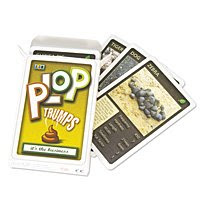 Now I'm not as offended by poo as a lot of people I know. In fact, I find the word "jobby" hilarious. But I don't particularly want to play a game that involves pictures of poo and includes categories such as "hardness", "length" and "smelliness". Would you?

Actually, scratch that question. I really don't want to know . . . . 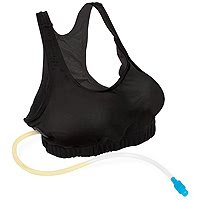 Gel and water filled bras are soooo last season if you're wanting to make your boobs look bigger. Instead. why not try this - the Wine Rack? Basically, you're store a drink in it. Which is kinda cool in a "hold on a minute, I'm drinking wine/coke/beer/whatever from a straw stored inside my bra" sort of way. In other words, kinda unhygenic but pretty handy at the same time.

The added bonus to the gross/useful factor?

It increases your cup size - albeit temporarily. Now, there's a selling point in my book . . . 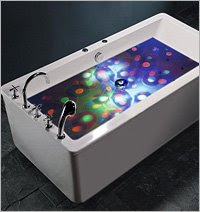 Who said baths were meant to be relaxing??? Why not experience the thrill of an Underwater Disco Lightshow instead? 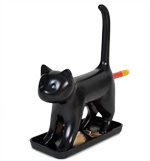 "Here kitty-kitty, here kitty-kitty. Come on, come closer. Don't look at me like that - I JUST WANT TO JAM THIS PENCIL UP YOUR ARSE!!!"

Yes, it's a pencil sharpener.

It could possibly be just what I always wanted. 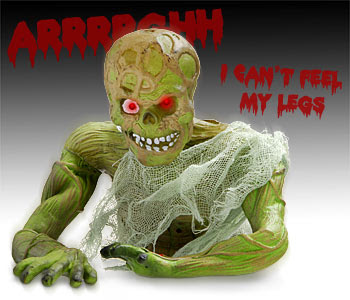 Or perhaps it is a crawling zombie that should be top of my Christmas list.

I think this thing would scare the shit out of me. 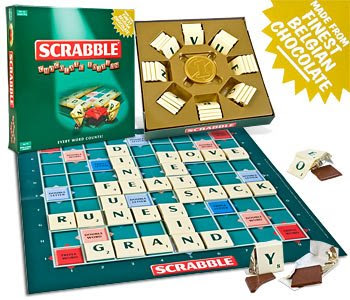 And last but not least, what about the ultimate disposable game - Chocolate Scrabble???

If you're losing, just stuff your face with the evidence. Excellent!!!

I've actually started my Christmas shopping now. And it didn't include anything mentioned in this post. (I'm not sure if that's a good thing or a bad thing!) And I know it's still over a month away from Christmas but I'm starting to feel just a tad festive. Please don't judge. There's been Christmas stuff in the shops since mid-September, so I've actually stopped myself from getting excited about Christmas for quite some time now.

One of the other main things that I like about Christmas? The cheesy Christmas songs. There's so many I like. But the best, hands down??? It HAS to be this one. Enjoy!!!