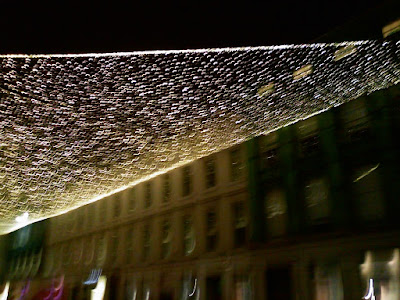 The pretty lights above Royal Exchange Square in Glasgow - apologies for the poor quality of my camera phone - bad LG Prada, bad bad!!!
My last post is gone. My choice. Last night in my inebriated and irritated state I wanted the person to know how much they were winding me up. Now I don't. Why make it easier for the person to do so? I'm better off protecting myself.

The comments are noted though. :)

Anyway, I thought I would re-link to my virtual date with Ben from No Ordinary Rollercoaster. It was a memorable night, that's all I can say . . .

Oh, and I didn't actually make it to the fireworks last night. I got all ready, and me and the person I was going with enjoyed a glass or two of rose wine while waiting for the other person we were going with. Now I KNOW what you're thinking - we didn't miss it because we got too drunk! We just forgot that we had to go via the Swarovski shop in Buchanan Galleries to pick up a present for someone (late night shopping) and so we heard the fireworks starting as we left the Galleries. We half walked half ran to try and make it, knowing there was no chance of making it to Glasgow Green, but hoping we could at least make it to a place where we would be able to see them in the distance. Just as we got to a place down near the bridge where we should be able to see it . . . it finished. Seriously - at that exact moment, all the noise stopped. Gutting. We'd came all the way into town for nothing.

The logical thing then, since we HAD came all the way into town for nothing (except for the present that is!), was to grab a quick drink. Well, OBVIOUSLY, right??? So we went to the first pub that was a) presentable enough and 2) had some spare tables. In this case, O'Neills in Queen Street. Which was all well and good apart from the fact that one of my friends chose to turn up in that very bar that night. It's always nice to see my friends, it's just a bit typical as I had told her I wasn't going out this week due to trying to stick to my diet and she comes in that exact pub (which is one NEITHER of us tend to frequent!) to see me with a glass of white and a glass of Baileys (neither of which are exactly renowned for their waist trimming properties) in front of me. Okay, I never lied about not wanting to go out, the only reason I'd came out in the first place was for the fireworks, the drink had just been a side effect of missing them. But I felt guilty all the same, like she had caught me in a lie.

Anyway, then I went home and one of my flatmates made pizza from scratch. Man it was delicious. Then I went to bed (or, to be more honest, passed out on top of my bed with the laptop on top of me - been a while since I did that!). I'm pretty glad I have the day off today as I am feeling slightly dodgy, my head is thudding a tad, and all I can think about is there is a couple of slices of pizza left in the kitchen and I HOPE they have my name on them.That being said, since I'm the only one in the flat right now, I think they WILL be mine anyway.
Anyway, this wasn't even meant to BE a proper post, just some inane hungover rambling. I have a proper post planned for later I'm sure. In the meantime, I'm going to stay in bed a while longer, perhaps read some book, catch up on blog-reading, watch some dvds (I have tons of 'em to catch up on - I still have half of House Season One to watch and Ghost Whisperer Season One. I have the whole of Point Pleasant, Grey's Anatomy Season One, My So-Called Life, Fat Friends, Pushing Daisies, Chuck. AND I've just ordered Seasons 1 and 2 of The IT Crowd, Spoons, and Seasons 1-5 of Peep Show on dvd so in theory I never need to leave the flat ever again!)
Anyway, to keep you all going until my next post (because I know you all wait with bated breath between each post, after all), here's some Peep Show to keep you entertained . . .