I don't know about you guys, but sometimes the perfect present for someone strikes me instantly, and other times I just struggle so much to actually try to even imagine what someone might like as a present that they don't already have. Most of the time, it's the latter. Which makes me sad as (like most people, I'm sure) I get a great deal of pleasure out of finding someone their dream present. Or a semblance of it anyway!

Recently over the past year or so, I've been finding that the ever-increasing popularity of voucher/deal websites like itison and groupon have really helped me with finding a good present. I've came to the conclusion that if I'm struggling to find someone a lovely present, how about a lovely meal or experience instead? I myself love having a couple of outstanding voucher deals for a restaurant or hotel or other type of adventure, ready to book up at any time!

That being said, it doesn't really have the same instant grab of a beautifully wrapped present, does it? (Who am I even kidding here, my presents look like they've been wrapped by a five year old .. .  polar bear but a girl can dream, right?) So I wanted to share how I try to make a voucher deal seem just as attractive as a regular present . . . without having something physically big to wrap. 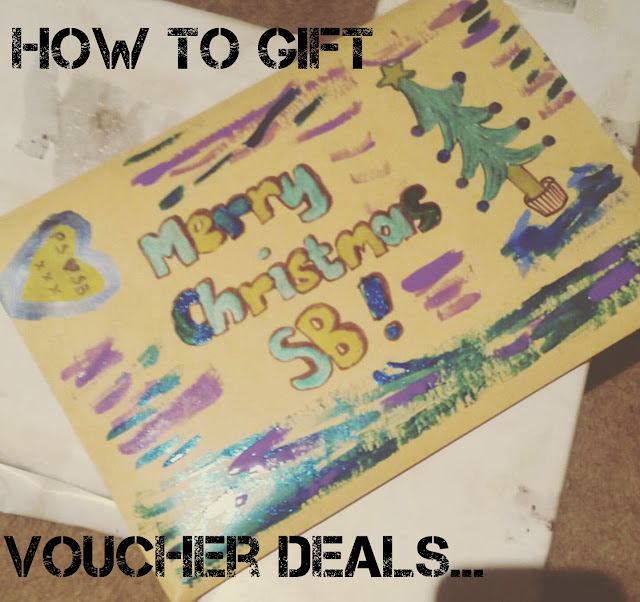 So first up . . . choose your poison. (By poison, I mean voucher deal. In case that wasn't clear.)

I tend to use three websites. The aforementioned itison and groupon, as well as 5pm.co.uk I prefer the latter myself, but it is pretty Scottish-oriented so might not be for you!

I try to look out for an interesting experience that someone could have first of all - say something like a loch cruise, or perhaps a tour of somewhere like a distillery/brewery.


Or if I'm looking to get them a restaurant deal, I try to look for something other than a straightforward meal. So perhaps a cheeseboard, for example, or an afternoon tea with a twist. Or even just a restaurant where they wouldn't normally just book up to go themselves. (But nothing too outlandish, unless they're one of those "I'll try anything" types!)

In terms of hotel deals, I like to look for deals where I think they'll get a lot of bang for their buck (wee extras like a dinner as well as bed and breakfast, or prosecco on arrival) or perhaps a hotel in a town I know they've always talked about visiting.

Buy the deal. Print the voucher.

***Important point here. Make sure you have access to a printer if you want to print the voucher. You can email it, obviously, but that possibly renders the rest of this post pretty irrelevant.***

Now, at this point, I like to make sure that I have gathered together the details of the deal, because while the more legal part of the small print tends to be on the voucher, sometimes the more fun info isn't there. Like the actual fab details of what the deal gets you, more info about the hotel, or the menu you'll be choosing your meal from . . . things like that. But this information is usually on the same page of the deal information itself when you're ordering, so I think it's nice to add it!

What I do is copy and paste the information over into a Microsoft Word document (if there's a picture of some sort I'll paste that over too) and print the document out, to add to the voucher itself. It means when they open their present, they will have all the relevant information about their deal, so they can see the full picture and realise just how awesome you are... oops! By that, I mean how awesome the present is!

Now for the fun bit!

Well, this is the fun bit as far as I'm concerned.

You grab an envelope and make your own customised packaging for the voucher and its accompanying information. I really do love this part. Now, I'm not particularly talented at art (and that's not false modesty, I'm really not. I won a drawing competition when I was 8 but I still draw like an 8 year old 29 years later so let's just say my talent has really not progressed.) BUT I do like doodling, particularly doing bubble lettering. So I tend to write the name of the person the deal is for on the front of the envelope in big letters, colour it in, add some random festive (or relevant at least) graphics and then top it all off with lots of . . . nail polish! Particularly glittery stuff. I have some nail polish that I've never worn, but it has adorned many of my "gift envelopes".


Do you like a good voucher deal? Have you bought any this year as presents?

Email ThisBlogThis!Share to TwitterShare to FacebookShare to Pinterest
Labels: Christmas, deck the halls with boughs of holly, gift ideas, good things come in . . . packages . . ., shop til I drop