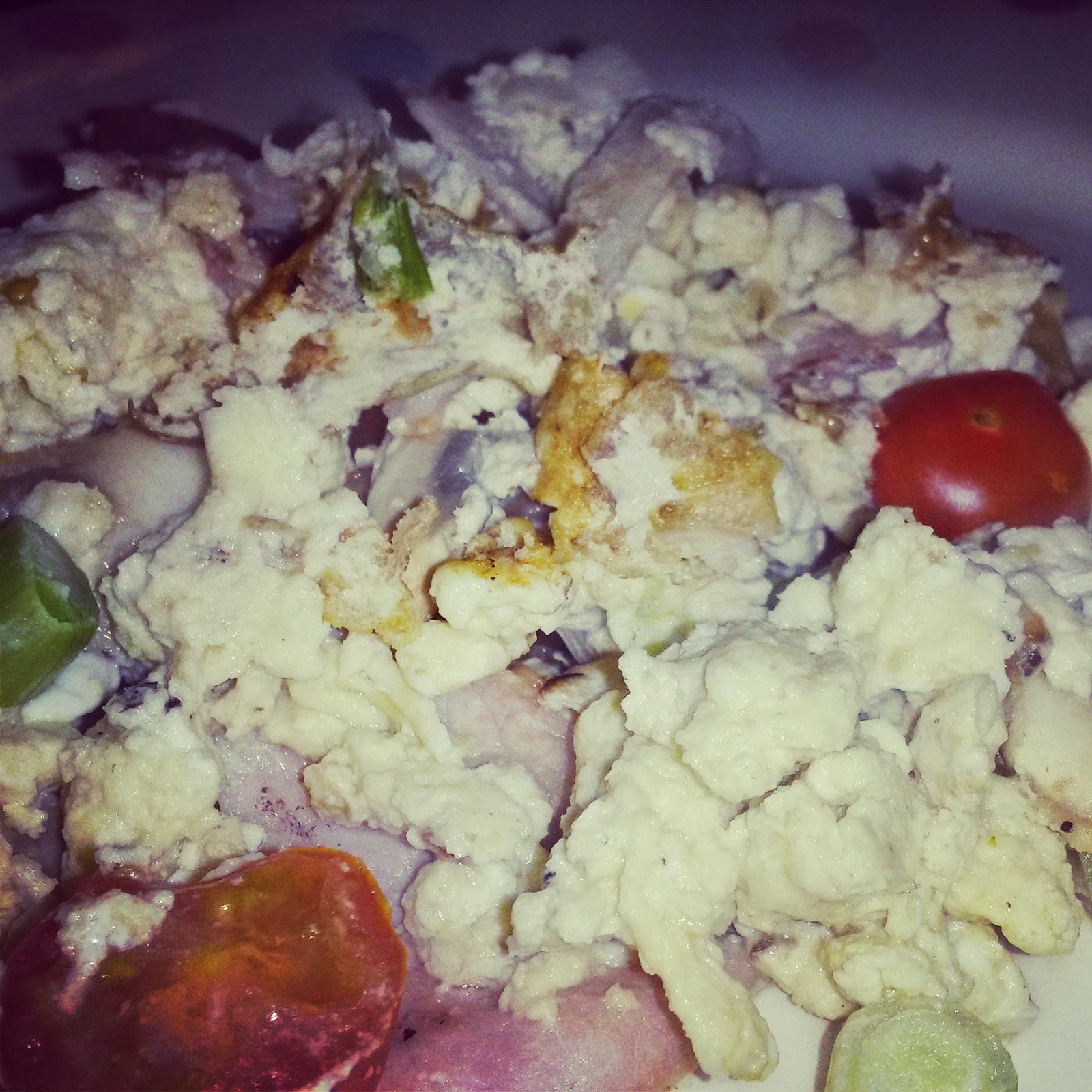 As I mentioned in my last post I don't get a lot of time to make breakfast during the week due to work - it's easier for me to throw together some overnight oats the night before or take in some cereal and almond milk than it is to actually create a slap-up breakfast on a weekday morning. It's also far easier for me to stay in bed and hit the snooze button twenty thousand times before finally dragging myself out of bed half an hour before I'm due to leave my flat!

However, when I was contacted by a representative for British Lion Eggs asking for me to create a recipe using eggs, I decided to make an exception to the rule today and try and cook something up for me and the boyfriend.

I decided to make an "all-day-breakfast" scramble of sorts. You could throw anything typically "breakfast" into this - I decided to go for relatively healthy facets of a traditional fry-up, mixing tomatoes, mushrooms and chopped up bacon into scrambled egg, along with the possibly slightly less traditional breakfast ingredients of spring onions and some cream cheese! 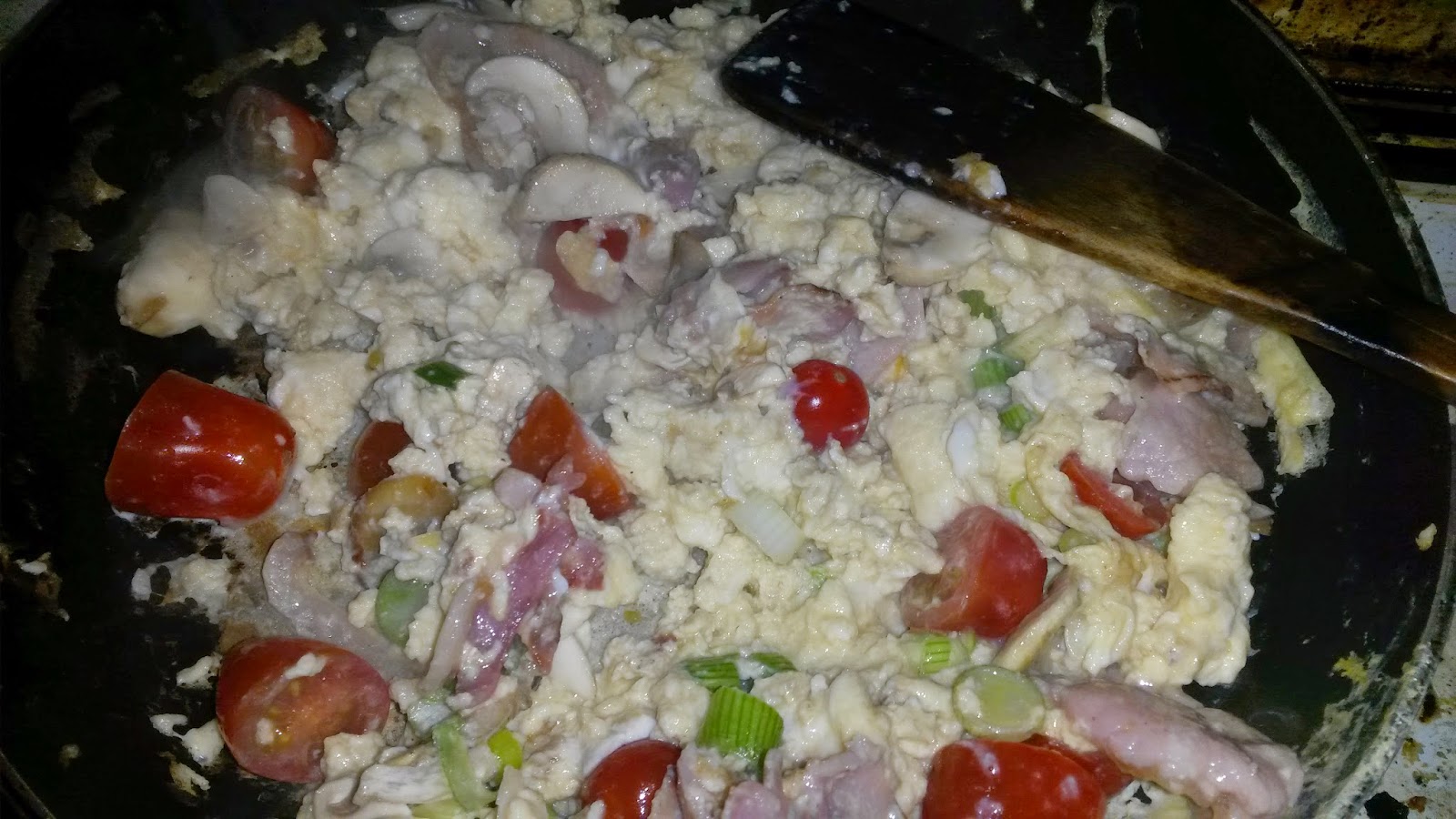 So how do you make this delicious but simple creation??? Easy! Just fry up 2 slices of unsmoked bacon and add some sliced mushrooms; meanwhile crack four eggs into a bowl and mix with a tablespoonful of cream cheese. Tip the eggs on top of the bacon and mushrooms in a pan and scramble, adding sliced up cherry tomatoes and the spring onions as the eggs cook. I meant to top this with some feta cheese but it completely slipped my mind - too early in the morning for me to be thinking properly, I guess! Despite the omission of cheese it was absolutely delicious! 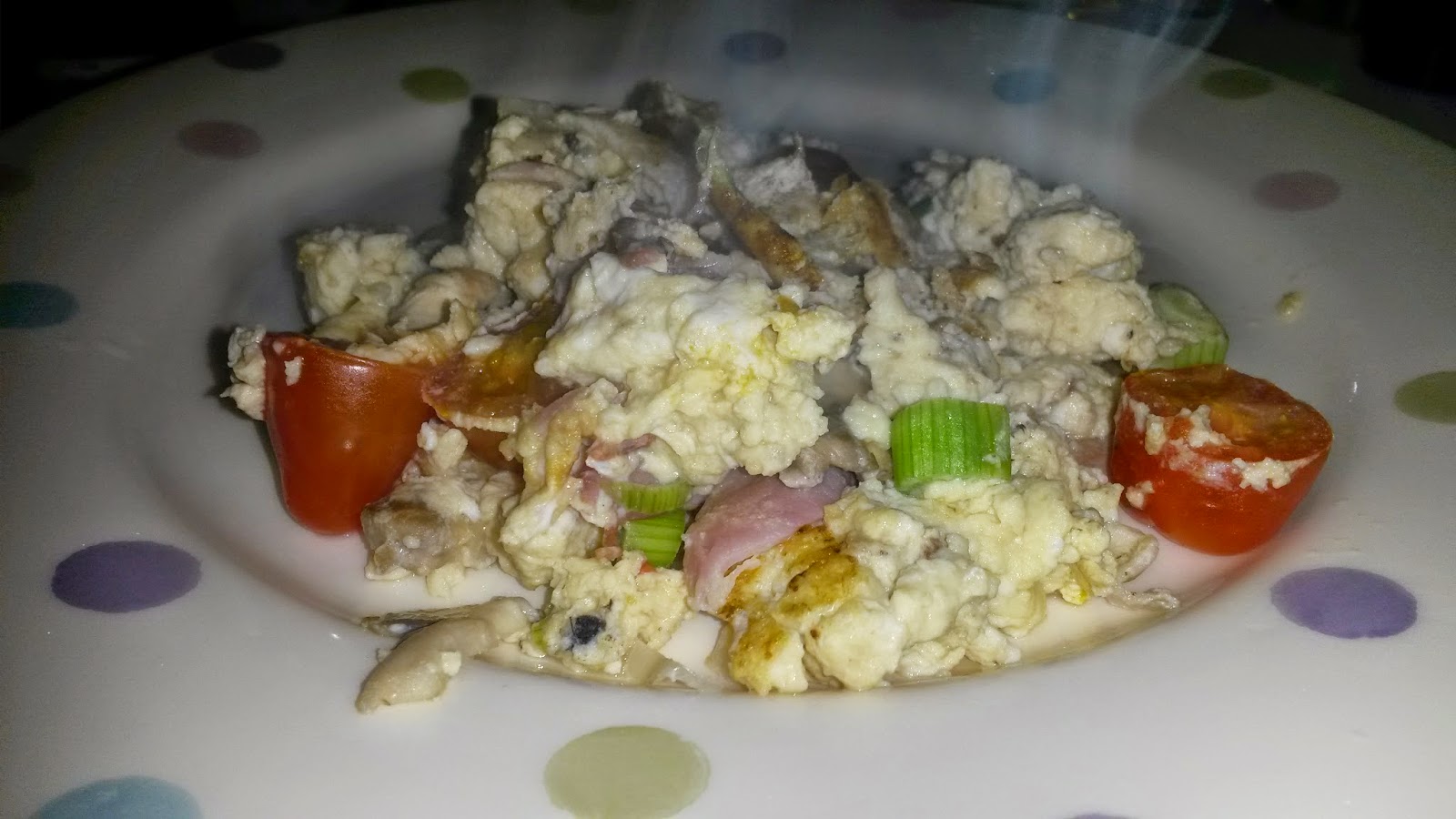 Quite often if I eat breakfast early I feel my stomach growling around the office by mid-morning. However, I've always found one of the best things about eggs is that they tend to fill me up until lunch.

I know a couple of people who don't like eggs or suffer from an Egg Allergy. .  . I'm glad I'm not one of them because I loved this breakfast and will definitely be making it again very soon. Although perhaps I'll make it a little bit LESS healthy next time. Sausages and black pudding scramble anyone??? ;-)


This post was produced in collaboration with British Lion Eggs.

WEEKENDS ARE ALL ABOUT THE BRUNCH . . . 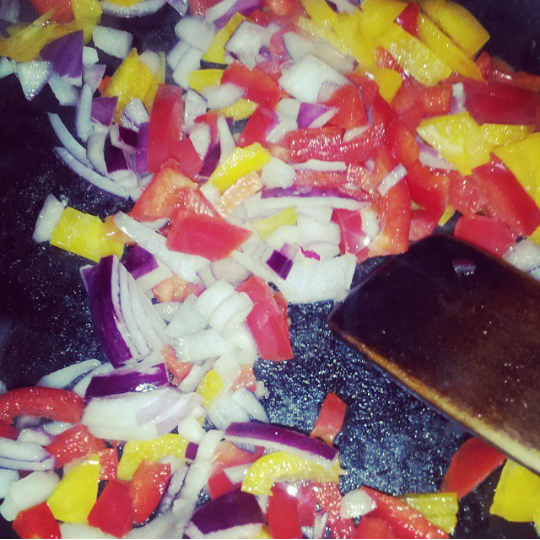 Like most people who work Monday to Friday I love weekends. One of the reasons for this is that I get to lie in bed for as long as I want of a morning. Another is that I still have time, no matter when I get up, to make myself a decent breakfast. During the week I exist on Weetabix and almond milk, overnight oats or - when I'm being really naughty and lazy - a chocolate bar out of the work vending machine (I know!) so it's good to actually get a bit of extra time to hang out in the kitchen and make a proper meal for a change.

But what to make? If you are struggling for breakfast/brunch ideas, here's a couple of my favourites! 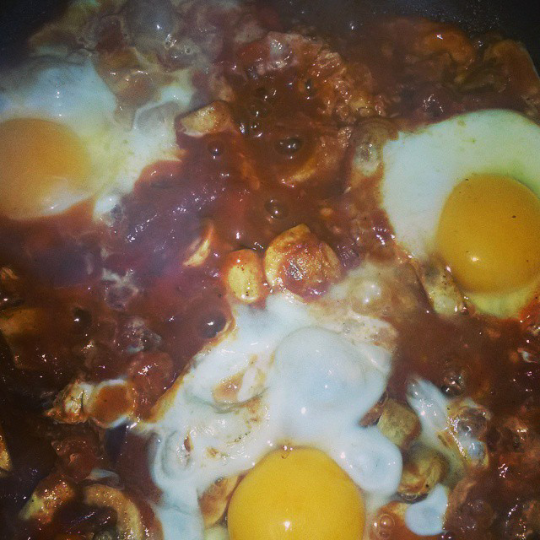 This is delicious and actually really bloody healthy if you actually look at the ingredients. It's basically just a tin of chopped tomatoes, onions, peppers, spices and anything else you want to add (mushrooms, chorizo, the world is your oyster!) fried up and then topped with egg. I usually add a wee bit of grated cheddar or feta (or both!) to the end product but you can leave the cheese out to keep it completely saintly if you wish!

(I go by the above spelling of the dish as I originally got it from the Harcombe Diet recipe book, which used this spelling. It has other spellings. Just thought I'd point that out...) 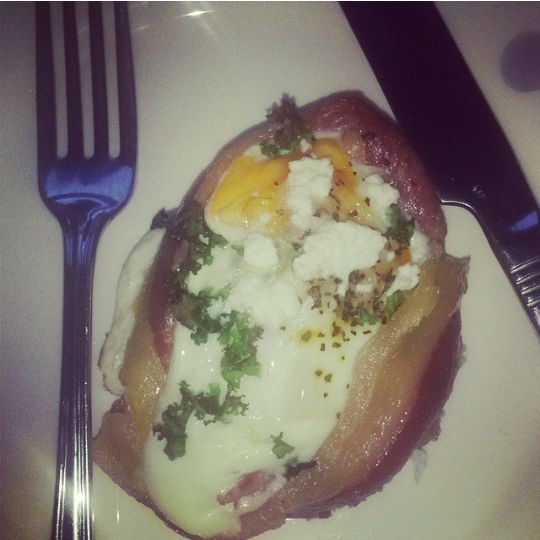 I got this one from the I Quit Sugar book and, while I think the idea of me ever actually quitting sugar is quite laughable and, frankly, ludicrous, it's a good wee recipe. Just line a muffin tray with bacon, crack an egg in, and stick in the oven. The result is pretty damn tasty. And low carb. But mainly tasty.

Recipe can be found here. 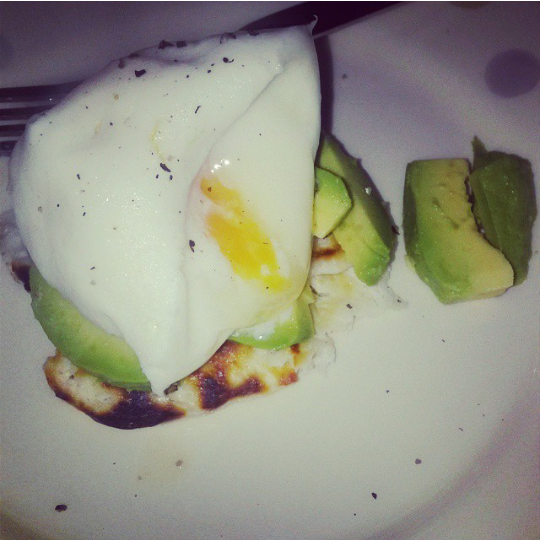 One of my friends is mega-healthy and kept posting pictures of delicious breakfast stacks which inspired me to try one myself. The boyfriend suggested using halloumi as a "bread substitute" for the base of the stack, which worked pretty damn well. (I'm a halloumi FIEND by the way.) Just slice up the halloumi and grill, lay it out on a plate and top with sliced avocado followed by a poached egg. Add a sprinkling of black pepper. BOOM! 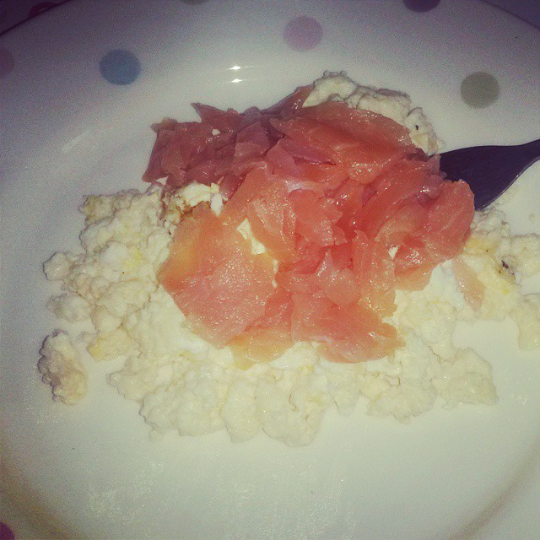 You can't really get a simpler combo. Just scramble up your egg in the frying pan, stick it on the plate and top with sliced up smoked salmon. Utterly gorgeous.


Okay, so I realise these all involve eggs, and so you're probably not going to enjoy them if you don't like eggs (I do realise that there are people out there who don't! I even know a couple of them!) ... but as far as I'm concerned eggs are a weekend breakfast staple! Hopefully I've provided you with some brunch inspiration, if you were looking for some...

So today is my third fast day and so far it's definitely been easier than I thought. Still hard, mind, but I genuinely thought it would be harder than this.

I mean, there always seem to be waves of hunger. Like this morning, when I decided to hold off until lunchtime to have my first food but was suddenly overcome with starvation at about half past ten. But I stayed strong and it passed and I was able to hold out until lunch without too much difficulty!

I occasionally feel a bit moody, but to be honest that might be my personality that anything relating to food. Although my boyfriend saying proudly he thought he was under his calorie intake for the day, meaning TWO THOUSAND FIVE HUNDRED CALORIES did sort of make me want to punch him.

But the value you put on food when you're not having as much is also pretty ridiculous. Case in point: last Friday. I'd had my second fast day the day before and, while in Marks and Spencers buying my 283 calorie ready meal (that's an approximate figure) I decided to buy Friday's lunch to give me something to look forward to.

I went for a simple - but delicious because "it's not just food, it's M&S food, y'all!" - egg mayo sandwich along with Mexican chicken with a sour cream dip. It was going to be an epic lunch.... and one I wouldn't be able to have until two pm on Friday due to the way my meetings were laid out around lunch. But I was looking forward to it so much. I spent most of Thursday night fighting my hunger pangs by imagining how good my lunch would feel the next day.

So you can possibly imagine my feelings when I got out of the car at work on Friday morning... and realised that I DIDN'T HAVE MY LUNCH WITH ME!!!

I'm not proud of my actions.

My heart was pretty much broken.

But my lovely boyfriend went back to his house at lunchtime and got it for me. And then I only had time to eat the sandwich part of it. Which also upset me.

I don't think not eating has ever upset me THIS much before. And it wasn't even my time of the month! So I've deliberately not bought lunch in advance for tomorrow.

It seems safer that way...